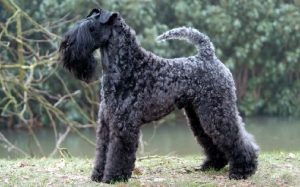 If you are thinking to add one in your family, then this breed may be the right choice for you. However, before adding them, here are some information in detail you must know about Kerry Blue Terrier.

Kerry Blue Terrier was originated in southwestern Ireland in the late 1700s or early 1800s. It is said that they were the only dogs, who would tackle Otter, single-handedly in deep water. The Dublin Irish Blue Terrier Club was formed in 1920, however, the Irish Kennel Club recognized the breed only in 1922.

Dog fanciers quickly became strongly infatuated by the Kerry Blue breed which gained full recognition by the Kennel Club of England as a distinct breed. With their popularity, the Blue Terrier Club of England became the group for the breed in England.

Kerry Blue Terrier entered the first Westminster Kennel Club Dog Show in America in 1922 and competed in the Miscellaneous Class. Then after, it was officially recognized as eligible for championship competition by the American Kennel Club in 1924. The United States Kerry Blue Terrier was formed in 1926.

Kerry Blue Terrier is excellent around kids. Since they are also rambunctious they will be the best breed for children. Kerries love playing and are very gentle around kids.

They know how to handle a kid while playing. Kerry Blue Terrier are never aggressive around kids. Instead they will have saint-like patience even if they are bored or not willing to play.

Kerry Blue Terriers are truly a family dog. They are very loyal and affectionate with their family members. Kerries are good-natured with every human of all ages. They love spending time with their loved ones and are happiest when they’re with their human pack.

Kerries make a fantastic watchdog. They will welcome the known guest but at the same time, they will warn their family members with any potential intruders. They are not known as nuisance barkers, but when they bark, they sound intimidating.

Kerry Blue Terrier is likely to have separation anxiety when they are left alone. They will become destructive and aggressive when bored. As already discussed, they love being in the human pack.

Kerry Blue Terrier is highly intelligent dogs which can make them difficult to train. Like all terrier breeds, they are also independent thinkers. It is very important to teach your Kerries proper canine manners.

Kerry Blues might not respond nicely or obey your commands since they think they’re the alpha and have the “don’t teach me” personality at times. But positive reinforcements and treats might help you during the training session.

They spend a lot of time observing and analyzing the behavior of their masters and will try to manipulate the situation when possible. Consistent and confident leaders are needed to train the Kerry Blue Terriers or else they will easily rise to the position.

The health problems seen in Kerry Blue Terrier are a neurological disease called, cerebellar, abiotrophy, a condition that affects puppies and go progress to paralysis.

Dry eyes is another condition Kerry Blue Terrier suffer from. It is caused when the dog’s eye doesn’t produce enough tears to stay moist.

The Kerry Blue Terrier will give birth to an average of 4-8 puppies at a time.

Weight: The average weight of the Kerry Blue Terrier is 33-40 pounds.

To conclude, Kerry Blue Terriers are wonderful breed with well mannered with every people. However, temperament and personality depends on how you raise and take care of them.