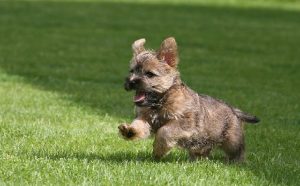 Cairn Terrier is a small sized, working dog terrier developed in Scotland. They are known for their fox-like expression. The head is broad with small erect ears. Their body is longer than it is tall with a small tail. The eyes are deep, wide-set and dark hazel in color.

Cairn Terrier is active and lively who wants to part of every family activity. They need regular exercise and should be taken out for a walk or to play for at least half an hour daily.

Cairn Terrier was originally bred on the Isle Skye and Scotland. They were bred for courage and for the turning away foxes and other vermin from heaps of stone known as Cairns, from which it got the name. They were also used by farmers to catch mice, squirrel, and other rodents. Cairns would hold and bark at the animals until the farmers come to claim it.

The American Kennel Club recognized Cairn Terrier and registered it in Terrier group in 1913. They currently rank 70 of 193 other registered breeds.

Cairn adores children and is very tolerant of them. In fact, they love the noises that children make. They like to play with them and makes a great playmate. However, their playtime should be supervised and children should be taught how to approach dogs.

Cairn terriers are of loyal, curious and fearless temperament. They are not aggressive and makes a great company for a family of all and every kind. Cairn is active, playful and is naturally a digger. They like to dig grounds and satisfy their curiosity.

As they like to be with their people most of the time, leaving them alone for a long time is not a good idea. They might become destructive and have separation anxiety.

With their high tendency to catch any small animals they see, they might just break out of the house. So, a properly fenced area is needed for them to live. They are also suitable for apartments but a regular walk out in the park is needed.

Cairn is an intelligent dog and they can be easy to train for a confident and patient master. They are stubborn like many terrier dogs. Positive reinforcement training is needed which includes treats, vocal praises and a gentle pat on their back.

Cairn Terriers are suspicious of strangers. They should be socialized at an early age so they can get along with them well.

Cairn Terriers are usually healthy with the life span of 13-14 years. They are prone to suffer from hereditary health issues. Other than that they might suffer from some canine diseases like:

Cairn Terrier coat is quite harsh. R brushing is necessary to avoid unnecessary tangle. They shed moderately and time to time brushing can decrease their shedding.

The average cost of Cairn Terrier is $700- $1000 USD. However, adopting one can cost you way cheaper that includes only the expenses of puppy care before adoption.

Visit Doglime more information about dogs and their behavior.