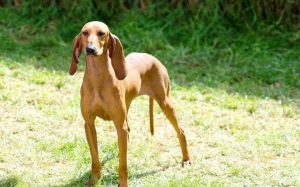 The Segugio Italiano is a calm, intelligent and gentle breed that was bred for hunting and now makes an excellent pet. They are extremely affectionate around people they like.

The Segugio Italiano has a great sense of smell and tends to respond very well to a strong leader who teaches them with praise and reward.

The Segugio Italiano also called the SEGIT (pronounced as- see get) is an ancient dog breed who was adopted by the Romans and they moved to Italy which were specially bred for hunting.

The demand for this breed decreased by the nineteenth century and they became quite rare.

They are not much popular in their native country but their popularity has spread far beyond the borders. They have earned fame among other neighbor countries and today they are considered as one of the ten most popular breeds in their homeland.

The Segugio Italiano gets along well with children, especially with the ones who know how to approach dogs. If well socialized early from their puppy age they tend to be best friends for life. However, as with all other breeds, they need to be supervised with kids.

The temperaments of Segugio Italiano is kind, gentle, and adaptable and makes an excellent family companion. They need a certain amount of independence and is not clingy. But they do need a company of a family member or other dogs home.

The Personality of Segugio Italiano is active and bold, they are quite alert and seems to be wary around strangers. If not cared for or left alone for a long time, they tend to be boredom and end up with various behavior problems.

Training a Segugio Italiano can be a little challenging, as they might turn to be stubborn when it comes to training. They are intelligent and eager to please dogs, therefore, if they find a consistent trainer who can give them firm guidance and able to establish a strong pack leader and give them obedience training.

They tend to be bored or restless; in that condition teach them”silent” command which can be a very useful part of training a young Segugio.

Segugio Italiano suffers from some hereditary health disorders, such as:

Dogs similar to Segugio Italiano are: