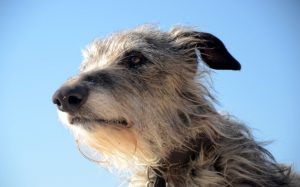 With a friendly and sensitive personality, the Scottish Deerhounds are highly energetic giant breed who loves to play and to be active most of their time and require daily exercise.

Like other large dogs, the Scottish Deerhound demands a lot of space and food, therefore they are not well-suited for apartment living.

The Scottish Deerhound, as their name suggests was originated in Scottland and their history has been traced back to the 16th century. The Scottish Deerhound got special attention at dog shows and since then they gain fame among people and were appreciated for their greatest ability as a noble companion to everyday people.

They were highly valued for their hunting ability, some people still hunt with this breed. In the USA, it’s illegal to hunt deer or other animals with dogs, but Scottish Deerhound is used for hunting coyotes, rabbits and sometimes wolves.

In 1769 the breed almost went to extinct because of the destruction of the Scottish clan system, thanks to Archibald and Duncan McNeil who saved it from extinction.

The Scottish deerhound was recognized by the American Kennel Club in 1886. The AKC has ranked 141st among all the breeds they have registered.

Is Your Child Safe With Scottish Deerhound?

Scottish Deerhounds does very well with children, especially with the older ones who know how to interact with dogs. However, their large size makes them unsuited to families with small children; they can easily knock them out.

It is important to teach your child how to approach and always supervise every between dogs and young children to prevent accidents. Never let young kids walk a Scottish Deerhound, the dog won’t be able to hang onto the child if the dog decides to chase something.

The temperaments of Scottish Deerhounds are affectionate, gentle, sensitive, strong and brave. They have a strong desire for human companionship, therefore, they do not do well in homes where they are left alone for a time.

Scottish Deerhounds have an independent and confident personality, therefore they do what they want, when they want and will please when are on the mood of.

The behavior of Scottish Deerhound is quiet, devoted and alert. They are not aggressive but are very courageous and fearless dogs and will never hesitate to face of danger.

Training a Scottish Deerhound is not easy, they require high patience and understanding. Because of their sensitive temperament, they don’t respond well to harsh training or treatment. Positive reinforcement is the best training techniques to use with this breed, it includes rewards and praise and play.

Quick facts about Scottish Deerhounds are:

Health problems the Scottish Deerhound prone to suffer from are:

Scottish Deerhounds are found in six colors, which includes:

Dogs similar to Scottish Deerhounds are: