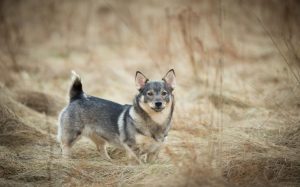 The Swedish Vallhund is an intelligent breed with active and alert personality. They are generally healthy dogs who are prone to very few health problems.

Origin And History Of Swedish Vallhund

The Swedish Vallhund is the oldest dog breed many years ago it was originally bred for herding cattle in its native Sweden.

The Swedish Vallhund is a dog breed with wolf-like appearance, which was thought to be developed by mixing Scandinavia Spittype dogs with short-legged Corgis of the British Isles.

The Swedish Vallhund was recognized by the Swedish Kennel Club as Svensk Vallhund which means Swedish herder.

Yes, Swedish Vallhund is child-friendly, they usually get along with children and love spending time with them. However, because of their hunting instincts, they may tend to nip running children, therefore supervision is necessary to ensure their even-tempered. Together with this, it is also important to teach your child how to interact with dogs and avoid ear and tail pulling of dog.

Temperaments of Swedish Vallhunds are friendly, fearless, energetic, spirited and engaging little companions. They enjoy doing the job and dislike being useless. Swedish Vallhunds is generally gentle and kind, they usually get along with people and other pets.

Swedish Vallhund has a bold personality, they usually are known to be barkers which makes them excellent watchdogs, but their excessive barking tendencies might sometimes create problems for city life.

Swedish Vallhund is quite strong and carries a lot of strength. These dogs are usually eager to please their owners. Despite being highly energetic, they require only a moderate amount of exercise to remain healthy and happy.

A daily walk is needed and if you don’t have a yard to play in at home, then you can take them to parks and gardens when they can get enough space to run and play.

As like other herding dogs, the Swedish Vallhund is also an independent thinker and can act little bossy, so training a Swedish Vallhunds can be a little challenging. But there’s nothing to worry, positive reinforce can help you a lot for in taking their good response.

You should provide them consistent and firm training so that you, you are able to create leadership before them. Offer them lots of treats and praise to make them enjoy their training.

Swedish Vallhunds are pretty healthy dogs in general, as like all other breeds some health conditions that have been seen in this breed are:

The Swedish Vallhund dogs are found in five color patterns:

The Swedish Vallhund dogs give birth up to four to eight puppies at a time. If you have been deciding to adopt a Swedish Vallhund puppy, you are unlikely to find it for less than $500 and can expect to pay an average of $1000 or may be more than this depending on puppy’s breeding.

Dogs similar to Swedish Vallhund are: