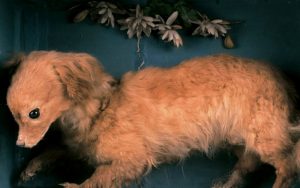 Turnspit was a small to medium-sized dog breed with short legs and a long body that was covered with a short rough coat. The fascinating thing about the now-extinct Turnspit Dog is that it was a famous “kitchen dog” bred for helping chefs in the kitchen to cook food. It was also popularly known as the Cooking Dog, the Underdog, and the Vernepator.

This breed was widely used and kept in the large kitchen of Britain in the 16th century. The appearance of this breed is described as ugly, unhappy, and suspicious looks. It was also known for its long body and crooked legs.

Looking back at the history of the Turnspit Dog, we can say that this breed didn’t have any fun life like most of the other breeds. It was bred for a specific purpose which is to run on the wheel in the kitchen to cook meat on a spit.

Other breeds like hunting dogs, herding dogs had an enjoyable life chasing game, herding animals, running in the field, etc, the Turnspit Dogs were forced to be in the smoky kitchen for hours running on the wheel. While most of the other breeds do their specific jobs with glee and delights, this breed had to run on the wheel despite their choice.

It is said that the owners of the breed occasionally toss some hot coal in the wheel to make it run faster. With many written documents found about the Turnspit Dogs, we can learn that this breed was seen more like kitchen utensils than as a dog, which is sad.

Sometimes these dogs were also taken to the church as a footwarmer on Sundays. There is a story where the Bishop gave a speech in a church and he was saying the sentence ” It was then that Ezekiel saw the wheel..”, many dogs ran towards the dogs hearing the word “wheel”.

How Did Turnspit Dog Extinct?

The Turnspit Dogs were kept as a dog that runs on the wheel to cook the meat evenly. They were the ugly and messy dog that no one wanted to keep as a pet. Only poor people who cannot afford servants were believed to own this dog. The owner used to keep this dog on the wheel that is kept in height with closed bars, so they will not escape from there.

These dogs go extinct when they were replaced by machines. They were widely found in the 1750s and by the 1850s, they slowly began to be rare as spit-turning machines were invented. They were gloomy dogs, so nobody wanted to keep them as a pet, therefore by the 19th century, they all completely disappeared.

We can assume that the temperament of Turnspit Dog was hardworking and dedicated. They would perform their task daily without any breaks and also they wouldn’t protest about the work. They are very loyal to their owner and are always devoted to their owner and the work.

Looking back at the history of the Turnspit Dog, we know that they were a very gentle dog breed that has not got any aggressive temperament. This breed was not kept as a family pet but if they were kept in a house with children, they were sure to make an excellent companion for children.

The Turnspit Dogs were found in the mixture of the following colors:

Height: The average height of the Turnspit Dog is between 8-12 inches.

Weight: The average weight of the Turnspit Dog is between 15-25 pounds.