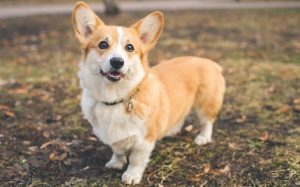 The Pembroke Welsh Corgi is a fun-loving dog breed who resembles a fox with its appearance. It is a dog breed which is very kind and loyal

The Pembroke Welsh Corgi an active and hardy breeds who are very affectionate towards their people. They require regular exercise to maintain their good-temperament.

As their name itself says the Pembroke Welsh Corgi belongs to Pembrokeshire area. The Cardigan Welsh Corgi is the older of the two breeds and was generally used in the development of the Pembroke.

The Corgis were originally used as farm dogs particularly with cattle. Because of being small in size, they were not so hard and expensive to maintain.

The Pembroke Welsh Corgi about which we are talking today were separated from the Cardigan corgi in the early 1930s. It was gifted to the Queen of England and because of her love, this breed became popular all over as family pet.

Yes, Pembroke Welsh Corgi are child-friendly dogs and because of their herding instincts, they sometimes nip at children’s feet or ankles. They are loving, affectionate and eager learners. But as with every breed, you should teach your children and dog how to approach and should supervise them.

The Pembroke Welsh Corgi is an intelligent, active, affectionate dog breed. They are to its people and want to be a part of the family.

The Pembroke Welsh Corgi had a happy, fun-loving and playful personality but sometimes stubborn or nature. These dogs are easy to train but better not to expect them to be dutiful. They are independent dogs who prefer to do things for themselves.

Although they are pleasing dogs they are wary of strangers which makes them good watchdogs. They are non-aggressive dogs but tend to bark if they feel that something or someone us threatening their home and family.

Training the Pembroke Welsh corgi is moderately easy. You don’t have to worry about their independent nature, you can easily motivate them by rewarding them their favorite foods and toys. they are of strangers, therefore, they require early .

You can socialize them from their very first month by exposing them to different people, sounds, visuals, experiences. Proper socialization will help your Pembroke corgi grow up to be a well-rounded dog.

The most common health problems seen in this breed are:

The Pembroke Welsh corgi are generally found in six color patterns, they are:

The Pembroke Welsh corgi gives birth to 6-8 puppies on an average. Puppies are born with very short legs so they need extra care and need to train properly on how to go up and down stairs. They are born deaf and blind with natural bob tails.

The Pembroke Welsh corgi puppies are quite boisterous and full of life so if you are keeping a corgi puppy then you need to make sure that your home is puppy proofed.