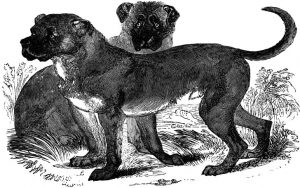 Dogo Cubano, which is also known as Cuban Mastiff or Cuban Bloodhound was a mastiff-type breed, which is now extinct. It was used for dogfighting and sometimes guarding properties and human beings. With a large-sized body, it had a muscular and strong physique that was covered with thick skins.

The head of the Dogo Cubano was broad and flat followed by a short muzzle. The legs were thick and the tail differs from different dogs. Some had long, straight tails while others had curved and short tails.

The Dogo Cubano was originated in Cuba from many breeds like Mastiff, Bulldogs, and Cattledogs. It is believed that the Molossus (a fierce war dog of Roman and Greek) was the breed that it was actually descendant from.

It was bred for many reasons which are to fight with other dogs like Bulldogs and Mastiff in the pit, track slaves in Cuba. At the time of slavery, these dogs were kept to chase and catch the slaves that try to escape. After slavery was ended, they were used as a fighting dog against big dogs like Mastiff and Bulldogs.

How Did Dogo Cubano Extinct?

When slavery was abolished from the world, the Dogo Cubano began to vanish slowly in the late 18th century. Dogfighting also started to become less popular around the time which led to a decrease in the number of Dogo Cubano. Since this breed was an aggressive fighter, people didn’t want to keep them as a family companion due to the fear that it would kill them or other people.

As the slavery ended and so did dogs fighting, the popularity of Dogo Cubano also declined. People didn’t want to keep them in their house as a pet due to their attacking personality. So, with the end of slavery and dogs fighting, the demand of this giant canine also decreased and by the beginning of the 19th century, it vanished completely and got extinct.

The temperament of the Dogo Cubano was very courageous and aggressive. They were brave that that were not afraid to face any enemy and loved to face any challenges with delight. This breed was said to be very protective of its master and was not afraid to risk their own life for their master.

Based on its temperament, the Dogo Cubano was said to be very independent and dominant that was only owned by the firm and consistent leaders.

Dog Cubano was a fighting dog which means they could have been aggressive and fierce. Therefore, they would not have been suited to a house with children. They also had a big body that might knock on small kids while playing and would’ve hurt them.

Dogo Cubano was found in the following colors:

Height: The average height of the Dogo Cubano was 20-22 inches.

Weight: The average weight of the Dogo Cubano was 95-200 pounds.