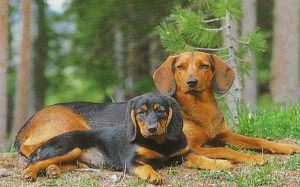 The Tyrolean Hound is a scenthound with a medium built, lean but strong body, and very keen scenting ability. Their head is wide and slightly curved following a straight and well-developed muzzle. Their ears are set high on the head and are long and wide.

It is not at all suited for a novice or an inexperienced dog owner. If their activity requirement is met, they do very well with all aged people in the family. They need a house with an open place where they can perform their daily physical activities. They do not do well in an apartment

Tyrolean Hound was originated in Austria as a scenthound in the 1800s. Emperor Maximilian I who was the Holy Roman Emperor used this dog breed for hunting hare and fox. They were also used for tracking wounded game by following their scent. This hound is believed to be descended of the ancient breed Celtic Hounds.

It was recognized as their breed in 1908. The United Kennel recognized this breed as a member of the scenthound group.

Temperament: The temperament of the Tyrolean Hound is well-tempered, active, playful, and sometimes stubborn. They get along with their family very well and forms a strong bond with. They are loving and devoted towards them but can be stubborn sometimes.

Behavior: Tyrolean Hound thrives on the activities provided by its people. If they do not get a job to do, they tend to become anxious and depressed. Therefore, take them for outdoor activities like dogs sports, hiking, and running to keep them contained and healthy.

Personality: The personality of the Tyrolean Hound is loving, brave, smart, and independent. As a hunting dog, they are very brave and courageous. They make a great watchdog as they tend to warn their owner by barking if there are some unusual things going on.

Training Tyrolean Hound is not a difficult job to do as long as you are an experienced dog owner. They need a firm and consistent leader who can train them with patience. Reward them with delicious treats and lots of vocal praises as a source of motivation. Never be harsh or forceful on your dog as it will only make them scared or aggressive.

Tyrolean Hound does very well with children due to their friendly and playful nature. They adore kids and love to spend time with them. Although it is not a great idea to leave your child alone with dogs even if the dog is very gentle.

Always supervise their interaction when they are together to avoid any hurting from either party.

The Tyrolean Hound comes in the following colors:

Height: The average height of the Tyrolean Hound is between 16.5-20 inches.

Weight: The average weight of the Tyrolean Hound is between 35-60 pounds.