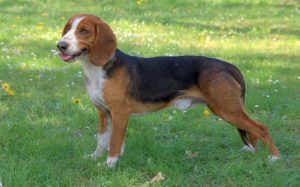 Deutsche Bracke is a hunting dog that is medium in size with sturdy build, distinct and beautiful appearance. It is also popularly known as the German Hound that was used as a hunting dog. It was used for hunting both small and big game through their scent.

The Deutsche Bracke was originated in Germany as a hunting dog. It can be traced back to the 18th century in the region named Westphalia. They were bred for hunting purposes where they hunted by the scent of the prey. It was known for its excellent scenting ability with a strong nose that could follow and track anything. They were mostly used for hunting wild bore and hares.

The Deutschen Bracken Club was formed in 1896 where all the local Bracke dogs were supported. However, in 1900, all the breeds were merged under the Deutsche Bracke breed.

Temperament: The temperament of the Deutsche Bracke is playful, energetic, elegant, and sweet. Their gentle and friendly nature makes them an excellent family companion that does best with all aged people but needs to be an active family.

Behavior: Deutsche Bracke is vocal by nature which cannot be trained out of them. Although they can be trained to stop when commanded otherwise this trait of them can be very disturbing and noisy for your family as well as for your neighbor.

Personality: The personality of the Deutsche Bracke is friendly, affectionate, and protective. They are particularly protective of the people they love which makes them a good guard dog. They are devoted and very loving of their people that want to spend most of their time surrounded by their human beings.

Training Deutsche Bracke cannot be done by a novice dog owner. They need an experienced dog owner who can train them with firmness and consistency. Use positive reinforcement as a method of training them as they tend to respond well to treats and lots of vocal praises. Never be harsh on them or train them forcefully.

Deutsche Bracke is loving, protective, and tolerant of children which makes them a great companion for kids. They are playful with them and also look after your kids. Although elderly supervision is always needed to avoid any kind of accidents and injuries from either party. Teach your kids to be gentle with dogs and handle them right.

Deutsche Bracke is a healthy dog breed that is not prone to any serious disease. Although they can face some common health conditions that can be genetic.

The Deutsche Bracke come in the following colors:

Height: The average height of the Deutsche Bracke s between 16-21 inches.

Weight: The average weight of the Deutsche Bracke is between 35-40 pounds.