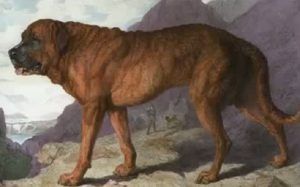 The Alpine Mastiff was a Molosser dog breed that was believed to be the largest dog breed in England in the early 1800s. They were large-sized dogs and one of the few breeds to have such a gigantic body.

The Alpine Mastiff dogs are widely remembered for their large body, ferocious hunting and guarding nature. Ancestors claim that this breed helped in creating the famous modern breeds like St. Bernard and Mastiff.

The origin of the Alpine Mastiff dog dates before 500 B.C. in the northern part of Europe. The first presence of these dogs happened in 1829 when a vast light brindle dog was brought to England from the convent of Great St. Bernard. The dog was named ‘L’Ami’ was exhibited across London and Liverpool claiming to be the largest dog of that era.

How Did Alpine Mastiff Go Extinct?

The Alpine Mastiff breed is thought to have got extinct in 1815 due to excessive crossbreeding with other large mountain dogs of Europe. People back then did a lot of crossbreeding using the Alpine Mastiffs. The purpose behind this was the desire to create several giant descendants of the breed.

The European breed was being used more and more for obtaining other mountain dog mixes. As a result, the numbers of Alpine Mastiff were gradually decreasing due to a lack of conservative measures.

People didn’t really care about increasing their numbers and focused only on crossbreeding. Therefore, these dogs totally disappeared before the mid-19th century.

Though there have been some efforts to bring back this breed by crossing breeds like Bernese Mountain Dog, Great Pyrenees, Great Dane, and Saint Bernard, they remain only in history.

The Alpine Mastiff’s temperament was friendly, calm, and gentle. As they were mainly bred for hunting and war, they possessed lethal striking abilities. Despite that, they were really kind and loveable animals who loved pleasing humans. In conclusion, they were truly attached to their owners and did excellent work as guard dogs.

Were Alpine Mastiffs Good With Children?

Yes, the Alpine Mastiffs were totally good with children due to their affectionate and kind nature. As they thrived in love and care, they loved playing and socializing with kids. Not only that, but they were also protective of their little buddies after they formed close bonds.

Being said that the Alpine Mastiff was a very child-friendly breed, it was also very necessary to keep the dog and kids under supervision while playing. It was to ensure the truly large body of the dogs didn’t cause any serious damage to the kids as they would easily be knocked off by their bodies.

Therefore, people really loved owing an Alpine Mastiff for their kids but leaving them alone wasn’t an ideal choice.

The Alpine Mastiff was found in the following two colors:

Here are some interesting facts about Alpine Mastiff:

On average, a mother Alpine Mastiff used to give birth to 4-12 puppies at a time.