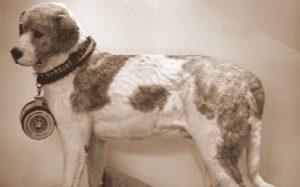 The Alpine Spaniel was a large-sized gun dog with a curly and medium-length coat that lived in the cold regions of Alps. These dogs were used by the Austin Canons in the mountain rescues around the mountains of Great St. Bernard Pass.

The Alpine Spaniels had longer snouts and droopy ears along with long, furry tails. It is said to be the predecessor of the modern famous breeds St. Bernard and Clumber Spaniel.

The Alpine Spaniel originated in the early 19th century in the Swiss Alps as rescue and guard dogs. They were first used as rescue dogs by the Austin Canons to rescue travelers who get lost or stuck in the mountains. Moreover, Swiss people also used them as guards of their cattle and sheep while herding.

A male Alpine Spaniel named Barry was famous for his work as a rescue dog in the early 1800s. It is also believed that Barry rescued a total of 40 people from the snowy mountains and died on the 41st attempt. So, his body was preserved and modified many times to describe the specifications of this extinct breed.

How Did Alpine Spaniel Become Extinct?

The Alpine Spaniel became extinct somewhere around the mid-19th Century. They disappeared due to a severe disease that allegedly affected the whole number of these dogs living between 1830 to 1847.

The acute climatic conditions of the Alps and a number of unfortunate accidents also decreased the population of the Spaniels. As a result, people failed to conserve these loyal rescue dogs and they vanished.

The Alpine Spaniel was an amazingly intelligent, loyal, and friendly breed. Because they were bred and trained for mountain rescues, they had calm and gentle behavior. Not only with people, but they were also relatively good with other dogs and pets.

The Alpine Spaniels were so brave that they would not fear to pass the windy storms when rescuing travelers. Their sniffing sense was also strong which helped them track the lost individuals and take them back to base camp safely.

Yes, Alpine Spaniel was an extremely child-friendly dog breed. As it was affectionate and pleasing, it loved being around and playing with kids. Furthermore, it would spend hours interacting and having fun with children but would never get bored.

The Alpine Spaniels would also become protective of their little humans if they bonded nicely. Because they thrived in love and were attention-seeking, they really adored being around small children. Hence, the Swiss natives would easily pet these dogs for their kids.

The only concern was the huge body of these creatures as children would easily get knocked by their bodies. Therefore, it was necessary to keep an eye whenever the kids and the Alpine Spaniels were playing together. Nevertheless, these dogs were an ideal option as companions for children.

Alpine Spaniel was found in the following colors:

On average, a mother Alpine Spaniel used to give birth to 3-8 puppies at a time.

Follow Doglime if you want more information about other extinct dog breeds.