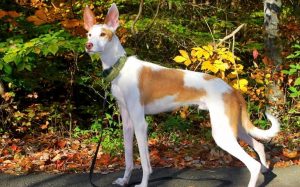 Tesem is an extinct large-sized hunting dog breed that originated in Egypt. The name ‘Tesem’ itself is also an ancient Egyptian word meaning ‘hunting dog’.

The Tesem dogs were leggy with curved tails along with pricked ears. They shared a very close resemblance with the modern hound breeds Saluki and Sloughi.

The origin of the Tesem breed dates back before 3000 B.C. in Egypt. They were bred and used as guard dogs and hunting dogs. Ancient Egyptians believe that these dogs represent the jackal-headed god of death, Anubis.

People even called this breed the ‘Khufu Dog’ as it’s early existence is believed to be with King Khufu who ruled between 2609 BC – 2584 BC. It is said that the king’s Tesem dog was named Akbaru and used to wear a collar.

Besides hunting and guarding, the Tesem dogs were also often used as companion dogs by the Egyptians as they would never get bored of long journies. Therefore, they were excellent dogs as they would assist in hunting, guard the house and livestock, and accompany people back then.

How Did Tesem Become Extinct?

Tesem dogs became extinct at the beginning of the New Kingdom of Egypt ( 1550 BC – 1069 BC). Though they were extremely throughout the Middle Kingdom period (2055 BC and 1650 BC), their numbers started declining as Egyptians began replacing them with dogs of Saluki or Sloughi type.

As Tesem’s preference decreased, people neglected in conserving their number due to lack of purpose and use. As a result, the breed which is thought to influence many modern breeds like Azawakh and Pharaoh Hound disappeared.

The Tesem dogs had loyal, friendly, and affectionate temperament. They loved being around their owner and please them. They would easily get bored home alone and would easily suffer from separation anxiety. As they were hunting dogs, they were fierce and vicious at attacking their prey. Therefore, it was very necessary to keep them on a leash whenever taking out for walks in front of other animals.

Were the Tesem Dogs Child-Friendly?

Yes, the Tesem dogs were extremely friendly with children because of their affectionate and loveable nature. They loved socializing and playing with kids as they would also get entertained.

However, it was very important to keep these dogs and children under supervision. It is because the large-sized body of Tesem would easily knock off the toddlers and their hunting instinct would also come in play sometime.

Some Interesting Facts About Tesem

Tesem was found in either Tan or Tan and light mix color.

On average, a mother Tesem would give birth to 4-8 puppies at a time.

Visit Doglime for more information about other extinct dog breeds.