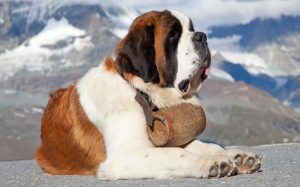 The Saint Bernard dogs are most famous for being watchful and patient pet and usually considered as “nanny dogs” for children.

is among the world’s most famous and beloved breeds. They are very powerful and muscular breeds with a huge head, a short muzzle, and dark-colored eyes. They always appear in friendly expression and gives a welcoming sight to visitors.

Origin And History Of Saint Bernard

Saint Bernards are giant-sized dogs with a deep history. However, they were traditionally thought to be originated at a monastery-hospice somewhere in Swiss Alps in the 11th century but their ancestors were known to have probably occurred about 600 years ago.

Saint were believed to be intended first as watchdogs. Soon after that their life-saving abilities became apparent. Over the three centuries, dogs of these breeds were credited with saving well over 2,000 human lives.

And Bernards we know today is known both for its both history exploits and love towards human companions.

The temperaments of Saint Bernard is loving, friendly, gentle, and tolerant. They are generally protective to their family members if they believe them in danger.

The personality of this giant breed is gentle, calm and patient. Unlike other large size dogs, they are not aggressive towards strangers as his size is enough to scare most people away.

These dogs are loving natured and hold a deep desire to be with their family which can result in separation anxiety if left alone for a long time. If you are a person who needs to stay most of their time, then you may need to consider a different breed.

Saint Bernards are independent natured dogs, but at the same time, they are affectionate and willing to please its master, if you can form leadership and consistent rules through positive training methods which include praise and treats.

Training this giant breed is not that if you are not a confident master. You need to be firm and consistent with their training.

It is important to train Saint Bernard as early as possible as with their large body, they could do some damage if they jump up on something as an adult.

If you find difficult in training Saint Bernard, then we would recommend you to enroll them in obedience school as soon as possible. They require early socialization and training to prevent them from potential temperament and behavioral problems.

Facts about Saint Bernard are:

Common health problems from which your Saint Bernards tend to suffer from are:

Saint Bernards are found in 5 color patterns, which include:

Saint Bernard can give birth up to 10 puppies at a time. The puppies of this breed are quite playful and adventurous. If you are planning to have of this breed, you will find them priced from $300 USD to $ 3000 USD with one of our credible breeders.

Dogs similar to Saint Bernards are: