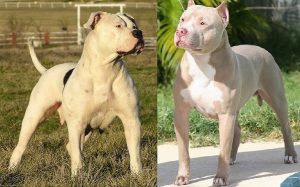 The American Bulldog is a gentle giant dog breed descending from the now extinct Old English Bulldog. Being a large breed, this dog fits in any family very well.

The American Pitbull is a medium-sized pure breed of dogs. It is a short-coated and solidly-built dog that is loyal and protective breed. This breed is companionable and people-oriented.

Here are the similarities and differences between the American Bulldog and Pitbull according to various factors:

The American Bulldogs are believed to descend from the English Bulldog for hunting and guarding purpose. Moreover, the breed in its early time was used for guarding and bull baiting purpose. The Bulldog that we see today, survived from being nearly extinct. Efforts of Dr. Johnson D. Johnson is responsible for saving this breed from extinction.

American Pitbull Terrier or simply Pitbull, was originated as a result of breeding an Old English Bulldog and Old English Terrier that came from Ireland and England. Similar to the American Bulldogs, Pitbulls were also used in sports such as bull or bear baiting before such activities were banned.

The American Bulldog has a confident, courageous and fearless personality. These dogs are socially active and are also very loyal to their owner. A bulldog in its puppyhood does not respond well with new people. But as it grows old, it becomes mature and more confident. As a result, these dogs start loving children truly. Overall, the Bulldogs have a kind temperament and are relatively a good family dog.

The American Pitbull is a breed that loves to please others. These dogs are more touching and emotional towards their people in comparison to other dog breeds. Furthermore, they are courageous and powerful which makes them a favorite pick among guarding dogs. Sporty and lively, the Pitbull needs daily exercise or walk to maintain its fitness. Though these dogs do not attack humans, they are violent against other dogs and animals.

The American Bulldog has a sturdy, muscular and strong physicality. It is generally 20-27 inches (males) and 20-24 inches (females) tall with a large head and powerful jaws. These giant dogs are large white color in color with brown, red, black or brindle patches.

Athletic and strong, these dogs have a deep and broad chest. Generally, they have a weight ranging from 30-58 kg. The eyes are usually brown in color but can also be of any color. Lastly, these dogs have a soft and small coat with different colors and a wide frame with a thick tail.

The physical appearances of American Bulldog and American Pitbull are somehow similar but vary in some parameters. The physical appearance of Pitbull includes strong jaws, a lean body, and a broad skull. These dogs are a bit shorter than bulldogs making them more athletic. They have a shiny coat with various colors such as red, blue, black, grey, etc.

The American Bulldog has a life expectancy of 10-15 years being prone to Hip Dysplasia. It is generally healthy throughout its life. Except for Hip Dysplasia, some common ailments include bone cancer and thyroid deficiency. Also, these dogs very often suffer from skin problems as well as thyroid disease and bladder stones.

The American Pitbull lives a normal life of 8-15 years old. Diseases that these dogs are prone to include allergies, heart diseases, and cataracts. They require an adequate amount of exercise and playing to ensure their physical fitness.

The American Bulldogs are sometimes stubborn and can be challenging to train. However, with their desire to please, these dogs can be obedient if you use positive methods of training. You can use verbal praise, treats, and gentle patting to encourage them. Repetitive training bores them so be careful not to repeat a task many times.

As other puppies, early socialization of the Bulldog is necessary. They tend to chew anything they find. Hence, it becomes necessary to teach them to release anything from their mouth by commands.

Training of the American Pitbull should start early in a calm and assertive manner as it won’t respond well to harsh tones. It is best to keep training sessions short because they’ll lose interest quickly even if you use treats as a reward. Training a Pitbull Terrier can be a long process and hence lots of patience is necessary during the process.

Even you train a Pitbull fully, it may decide to test its boundaries as it gets older and project dominance. So, as with a teenager, the calm assertion should work to handle this. Families with children should socialize their terrier puppies from an early age to accept outside children as guests. While the Pitbulls bond nicely with kids of their own family, they can sometimes become aggressive to other kids. Hence, you should teach them that all kids are welcome to their house with open arms.

The price of American Bulldog is usually expensive than the Pitbull Terrier. A Bulldog puppy costs an average amount of $800 USD.

The price of American Pitbull is less than that of the American Bulldog because of the crossbreeding related to it. A Pitbull Terrier puppy costs an average amount of $500 USD.

One thought on “American Bulldog Vs Pitbull”