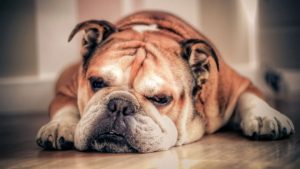 The Bulldog which is also known as English Bulldog or British Bulldog is a medium-sized, wide and muscular dog. They have loose skin on their head, a pushed in nose, small ear, round and dark eyes, and a hanging jowls. Their chest is full and deep and neck is short and heavy.

Bulldogs a board and muscular shoulder with a slightly arched back. They have a little rounded pushed up hip which is the reason they have a rolling gait.

The Bulldog was originated in England in the 13th century during the reign of King John. They were originally bred for a rough game called bull-baiting were bull would fight with a pack of bulldogs and the audience would bet in either of them. The ancestors of this bulldog were aggressive, fierce and extremely brave with big jaws.

The law banned the bull-baiting and soon after that Bulldog began to extinct. However, some bulldog admirer started to breed them from a brawler to sweet and less aggressive bulldogs. The American Kennel Club recognized bulldog and registered them in the non-sporting group in 1886

Bulldog can be a great companion with both younger and older children because of their friendly temperament. However, they are inactive and easily get tired, so they do not expect them to play with your children all day long. He will just walk away after he gets tired.

The temperament of today’s bulldog is not like his fierce and brave ancestors. They are gentle and sweet and mellow type. Bulldogs make a great family pet as they are extremely loving to children and loyal to people. They get well with people and other pets but can be aggressive towards unfamiliar dogs.

Bulldogs are not excessive barkers. They tend to bark only at suspicious things going on a surrounding. Bulldogs are quite lazy and do not want to play for a long time. Instead, they prefer to sleep and laze around. However, Bulldog puppies are active and rowdy before they hit adulthood.

Bulldogs are sometimes stubborn dogs who can be challenging to train. However, they have a desire to please their owner and can be obedience if used positive methods of training. Use treats, verbal praises and gently pat to encourage him.

Early socialization is necessary as many other puppies. Bulldog tends to chew anything they find, therefore it is necessary to teach him to release anything from its mouth on command.

Bulldog is not likely to suffer from any serious health issues. The average life expectancy of Bulldog is between 8-12 years. In this course of time, they may suffer from any kind of canine diseases. Few of the possible health problem they may face are listed below:

Bulldog has a , silky and glossy short coat which is more likely to shed. So, brushing 2,3 times a week will keep it clean and tidy. Their skin is loose around the neck area and wrinkled on the head.

Bulldog comes in a variety of colors which includes: red, fawn, white, fallow with black, ticked and white marking.

The cost of registered Bulldog puppy is from $1000 to $1500. However, adopting a puppy cost low than buying that includes only the expenses of caring for the puppy before buying.