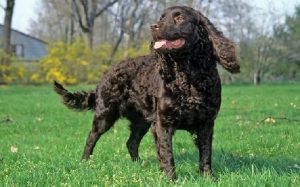 The American Water Spaniel, nicknamed as AWS and originally called Brown Water Spaniel is a medium-sized dog. They were originated in the United State of America in the 18th century to hunt small game like pheasant, squirrel, and other birds. Their ancestor includes Irish Water Spaniel and Curly-Coated Retriever. They are an excellent natural swimmer and can swim even in force water.

American Water Spaniel is longer than most of the other Spaniel dogs. They have a muscular and strong body that helps them to swim swiftly and with ease. Their overcoat is medium sized, curly or wavy whereas the undercoat is dense which protects them from cold weather. The eye color is either black, hazel or brown and the nose is black or brown.

The temperament of the American Water Spaniel is very friendly and wants to be part of the family activity very much. They get along with people and pets well if early socialization is done. Calm by nature, they are very alert and makes an excellent watchdog. They do not tend to bark often but if they sense any suspicious thing going around, they bark and warn their owner.

American Water Spaniel is lively and active dog with a high energy level. They are natural hunter and have high hunting instinct. Therefore, they should be given lot of exercises which includes running, fetching balls or toys.

American Water Spaniel requires a good amount of exercise to keep their body fit and for mental stimulation. As they are a natural swimmer, you should take them for swimming often to a near pool.

American Water Spaniel is a friendly, easygoing and obedient dog that thrive for human company. If they are left alone for a long time, they will have separation anxiety causing them to bark to get attention which will disturb your neighbors. If they get bored they will show their destructive behavior by biting things and scratching floors. Therefore, they should be exercised more often and taken out to play dog games.

American Water Spaniel is a smart and intelligent dog that is always eager to please its owner. So, training them is not hard as long as you provide gentle training with positive reinforcement strategy. Start with some basic obedience training and jump off to advance or agility training that keeps them mentally challenged.

Do not use a harsh word or force hand as they might get scared and will not be able to focus on training. Provide treats as a reward after they complete a task. Verbal praises and gentle pat should be used to encourage them.

Although they are friendly, adult supervision is needed as the kids might play rough and American Water Spaniel can defend them even by biting.

American Water is not usually an aggressive breed but can be aggressive with other pets. They are very territorial and can show aggression if some pet or some people who try to provoke them. Otherwise, American Water Spaniel is a friendly dog who gets along with both people and pets.

How do American Water Spaniel Behaves around Strangers?

Who Should Own American Water Spaniel?