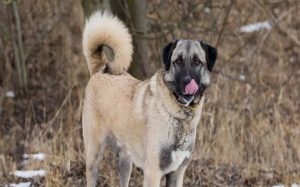 The Anatolian Shepherd Dog is a large sized dog which is originated from Turkey. The name Anatolian was derived from its originated place Anatolia. They were bred to guard or protect livestock. Although they now are a great family companion who is fiercely protective of their people and properties.

The average height of the Anatolian Shepherd is 26-29 inches and they can weigh from 80 to 150 pounds. They appear to be bold with a muscular body and strong head with small eyes that is either gold or brown in color. The ears are hanging and V-shaped. The coat is only an inch long with a dense undercoat. The average life span of Anatolian Shepherd is between 10-13 years.

The temperament of Anatolian Shepherd dog is very loyal, protective and devoted. They have a high protective instinct and are always alert to any threats that come to their family, property or even other pets. They are extremely devoted to their people and keep protecting them from any kind of danger or harm throughout their life.

As a quiet and calm dog, Anatolian Shepherd does not like loud noises. So, in response to it, they will start barking towards the noise and show aggressive behavior. They are natural flock protector and Anatolian protect any pets that are in the house as his own people. They chase animals that aren’t part of his flock.

Anatolian Shepherd loves the company of people and loves playing with them all day long. However, if they are left alone for a longer time, they will show destructive behavior and tends to bark a lot, disturbing houses around them.

Anatolian is a large breed with a high tendency to work and they are not suitable for apartments. They need a big space as they are territorial and wants to inspect the activity around them to make sure that their flocks are safe. So, they should be kept in a house where there is a big space for them to roam around and look after the movements of outsiders. However, keep the area fenced as they might suspect something and might chase that thing causing harm to them.

The Anatolian Shepherd is a highly intelligent, loyal and alert working dog. They are always observant and see themselves on duty to look after their people and flocks.

Anatolian Shepherd is friendly, playful and calm towards his family and family pets but with outsiders, they are not so welcoming. They have a natural instinct to suspect outsiders and to protect their flocks from them.

Training an Anatolian Shepherd is not so hard as they are quick, clever and obedient. They will learn and follow all the command you say but only if you are a confident leader. A novice leader should better consult with an experienced trainer who knows the behavior of Anatolian Shepherd. To establish leadership, you should be confident and gentle.

Anatolian can be an excessive barker if they see any strangers or pets approaching them. Although their natural protective behavior cannot be trained out, however, you can train them to stop whenever commanded.

Anatolian Shepherd is very friendly, affectionate and protective of children of their own family. However, they might not get along with the children outside the family very well. So, while taking Anatolian Shepherd out in the park for a walk, take him on a leash. Always supervise them while in the place full of children.

What Can Make Anatolian Shepherd Aggressive?

Anatolian is a natural protector of his flocks, people and their property. So, if he sees any danger coming towards them, he is likely to show aggression. However, they are not a killer or a hunter, so they will warn the trespasser by barking and growling. But if all his warning fails, he might bite and injure the intruder.

How Does Anatolian Shepherd Behave Around Strangers?

Anatolian Shepherd is very suspicious and reserved around strangers. They do not like any strangers approaching them or crossing their territory. They are wary of outside people and tends to bark at the sight of them.

Anatolian Shepherd should be socialized to many people as a puppy to insure they do not bark on every single person that passes by or approach them.

Is Anatolian Shepherd Right for You?

If you are an inexperienced owner or a first-time dog owner, get the idea off your head to bring an Anatolian Shepherd home. However, this dog is for an experienced owner who values this breed and knows his potential. As Anatolian is not an apartment dog, you should only get him if you have a big fenced area.