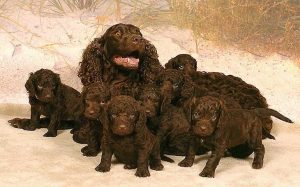 The American Water Spaniel is a spaniel type breed that is medium in size. It was originated in the United States for the purpose to hunt and retrieve both on land and in water. It has a distinct black coat that has a dense and curly exterior.

The newborn American Water Spaniel will not be able to hear, see, or walk like any other newborn puppy. They are completely blind, deaf, and rely fully on their mother even for warmth and for defecating.

Their body cannot generate enough heat, so thy pile up against the body of their mother to get the heat. To make the puppies defecate, the mother licks the belly which stimulates them to feces.

The American Water Spaniel needs to sleep a lot during the time of birth to the second week. They only wake up for food which is their mother’s milk. The milk is rich in antibodies that will keep the puppies safe from any kind of serious disease.

Do not bathe them as the mother will take the responsibility to clean them for some weeks by licking and cleaning their dirt.

The puppies start to see as their eyes begin to open around 10-12 days and by the end of the second week, they begin to hear. The puppies also start to walk a little and get to their littermates and mother.

It is a period when the American Water Spaniel starts to get familiar with the canine world. Their eyes and ears start to open which makes them see and hear the environment around them. This is the time when they will first learn about the voice of their mother and see how they look like. By the third and the fourth week, they begin to start running and playing with their littermates.

This is one of the important stages in a puppies life. In this socialization stage, the puppies will learn to get along with strangers and other pets. They are scared and fearful in this period, so socializing should be done carefully. Expose them slowly to the outside world and introduce them carefully with people and other canine friends.

The American Water Spaniel puppies are on the verge of growing and are very enthusiastic and mischevious. Guiding them in the right path and establish yourself as their leader is very necessary at this age. This is the perfect age for training so start with reward-based basic obedience training.

This is the stage where the puppies start losing their puppy face and looks more like an adult dog. The training should be continued with some additional tricks and commands. Enroll them in advance training and agility. As they are a retrieving dog, they have the natural instinct to retrieve and also hunt. Therefore, watch closely and train them in the right way so their behavior doesn’t affect the surrounding.

The American Water Spaniel hits adulthood at this age but is still maturing. Though they are developed physically, they are still immature and have puppy behavior somewhere for some more months. By this time, you need to complete their obedience training and establish yourself fully as a leader. If you fail to do so, you will not be able to train them properly and they might not take you as a master.

The American Water Spaniel experiences its first heat at the age of around 6 months. However, it is risky to involve them in mating and breeding at this time as they are not fully matured and it can harm their health. Provide them the required supplements and a complete balanced diet. Give them the right vaccination that is needed at this age.