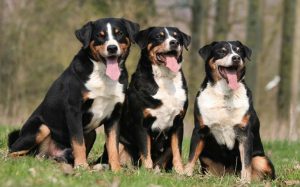 The fearless, courageous and even affectionate creature, is non other than Appenzeller Sennenhund. If you’re not acquainted with the breed yet, then you’re probably living under the rock!

But if you’re thinking of adding this breed in your family then obviously a well trained canine would make a fantastic companion. So, here are some advice on how and when to train your new Appenzeller Sennenhund.

When And Where To Train Your Dog?

Don’t know much about what is the right age for your dog to get trained? Then the answer is the formal training of Appenzeller Sennenhund begins when your pup reaches the age of 6 months. However, you can teach them simple commands like “sit”, “down” from the small age.

When your Appenzeller Sennenhund puppy reaches the age of 6-8 weeks you will need to be more gentle and reinforce them with treats and affection.

Now talking about the right place to train your puppy, then its your own house. If it has a big back yard then it the the plus point for you and your canine. House is the better choice to train your new pet as your Appenzeller will feel safe and secure in their own territory.

When they are mature enough, enrolling them to advance obedience classes, puppy school and agility training would help you the most.

How To Define A Task For Your Appenzeller Sennenhund?

You should always use one command at a time instead of repeating a whole list of commands, as it will confuse them and will lead to aggression. However, defining task for your Appenzeller would be the hardest thing on your entire dog journey, since they are very independent dogs.

You can reinforce them with treats if they do what you desired and expected. Using a lot of treats is also not the right way to define a task for your puppy, they will get habituated with the treats and not for your commands. They are doing because of the treats not because of the obedience!

There are several training methods, which can be frustrating for you to choose which one is the best. Here are some useful and easy methods for you to train your Appenzeller Sennenhund pup.

Shaping is the process by which you can teach your Appenzeller Sennenhund new tricks and behavior by rewarding him in each step of the p. You can break up the complicated action into smaller parts by which your dog will understand it more quickly.

Shaping is useful for teaching Appenzeller more unnatural actions such fetching, running an agility course etc. However, it will take some time since you’re teaching him step-by-step.

There are number of ways to make your dog do their desired actions. But, Catching behavior is the easiest among all. The concept of catching a behavior is that, rewarding your dog when he does something on his own and not without a cue. This method works on basic cues like, “sit”, “down” etc as these are the only natural behavior they do it on their own.

Example, wait for your Appenzeller Sennenhund to sit on its own, then immediately use verbal excitement such as Yes! to encourage him followed by a reward.

Choice training involves catching behavior that you like in your dog and rewarding them which your dog loves. Choice training can be used in several ways such as, if you’re dog is looking another dog or animal at a distance, say look and reward immediately for looking but not reacting.

If your Appenzeller Sennenhund dog reacts negatively at any point, turn him over or take him to another place where he can feel safe. After several repetitions, give your dog a loose leash and stand still not giving any command and watch how your dog makes choices and behaves around another dog.

Strategies And Techniques To Easy Train Your Dog

So. these were some strategies and methods to train your new Appenzeller Sennenhund. Hope you found it useful to train your furry friend at home.

Want to know about how to train your German Shepherd Dog?