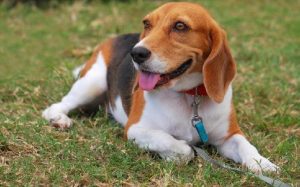 Artois Hound is a rare breed that is a descendant of the Bloodhound with which it has a very similar appearance too. It looks the bigger version of the Basset Hound with a large head, muscular, medium-sized body, and long pointed tail. It has been around for several centuries and has a reputation of an excellent hare hunter.

Artois Hound is also popularly known as Briquet and Chien D’Artois. Besides hunting, it is also kept as a family companion and has won the heart of many dog owners with its loving, devoted and good nature. Although it is not suitable for a novice dog owner and needs an experienced, active dog owner in a house with open space.

The origin of the Artois Hound is in France and was used as a hunting dog. Its skill and hard work at hunting were very much appreciated during the reign of Henry IV and Louis XII of France.

Although widely known as one of the best hare hunters, this breed was rare even during the height of its popularity. It was crossbred with British Hound which results in a more taller breed named Normand which is now extinct.

In the 1880s, efforts were made to remove the blood of Normand by Ernest Levair and his cousin, M. Therouanne and revived the old Artois. It took 20 years of effort but they became successful in recovering the pure Artois. However, after the World War, the number of the Artois Hound decreased again and today there are only around 500 of it registered.

Temperament: The temperament of the Artois Hound is gentle, loving, and independent. They can be independent sometimes but are loving and loyal towards their families. Since they are a hunting dog, they need a good amount of physical exercise and are suited with the owner that is active outdoors.

Behavior: Artois Hound is an excellent hunter that used its scenting ability to track its prey. Therefore, they have a high tendency to follow some interesting scent that their nose catches. While tracking the scent, they might go far from home, so it is necessary to keep them on a leash and a fenced yard.

Personality: The personality of the Artois Hound is friendly, gentle, brave, and playful. They do great as a family companion in a house with all aged people due to their loving and playful behavior. They also get along with other pets in the house if they are raised together from an small age.

Artois Hound is not a difficult dog to train if the leader is an experienced and patient trainer. They are a smart dog breed so they need to be challenged mentally by agility and tricks while training. If they get the same repetitive training every day, they tend to become bored and will not focus on the training.

Artois Hound gets along with children very well due to their loving, playful, and gentle nature. They are playful with them and loves to spend time with kids. Therefore, they make great playmates for children.

Although close supervision is necessary so there is no harsh behavior from either party.

Artois Hound is a healthy dog breed in general with few of the possible canine health problems.

The Artois Hound comes in the following colors:

Height: The average height of the Artois Hound is between 21-23 inches.

Weight: The average weight of the Artois Hound is between 62-66 pounds.