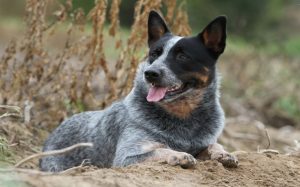 The extremely energetic and intelligent Australian Cattle originally developed by Australian settlers falls under herding breed. They have given the name as a red heeler and blue heeler on the basis of their color and moving reluctant cattle by nipping at their heels.

Australian Cattle Herding Dogs thrive on working and having to participate in family activities. They are medium sized and their height is about 1 foot 5 inches to 1 foot 8 inches tall while they weigh 30-50 pounds. The lifespan of this herding dog is around 12-15 years.

Since the Australian Cattles are herding dogs and they mostly are bred to look after cattle, they have a high instinct to nib cattle are any moving object. So, they have strong tendency to bite and if they are not directed properly and trained to socialize at their early age, than they can be dangerous.

Australian Cattles are highly devoted and very protective of their people as they develop a strong attachment towards them and are cautious of outsiders. They usually develop a strong bond to one person than another. They are quick to response to the emotion of its owner and if they sense any danger, they defend without waiting a command from its owner.

Australian Cattles are intelligent and catch command quickly which is a good advantage for the trainer but they can also become dominant a compatible trainer is necessary for training. Training should be started as early as possible to maintain the leadership position otherwise it will be nearly impossible to train a grown Australian Cattle.

Australian Cattles are herding dog but if used as a watchdog, they are highly alert, protective, courageous and watchful dog. They will alert you about any strange activity around the surrounding and try to protect their people without the command if he sees any harm coming.

Bold and athletic body appearance this Australian Cattles are not a dog that are to be kept in an apartment or a small house or area. Their body should be exercising all the time to maintain their muscular body so letting them run, chasing the ball, running with bike are great exercise for their body.

Australian Cattle can be dominant. They like to chase things like dogs and cats. They have a strong tendency to nip at whatever he is chasing. Therefore, keeping a cat with him is not a great idea unless they both are raised together since small.

Australian Cattle are mostly quiet and don’t bark often but if they hear and see any strange things or people in his surrounding, they bark at high pitch disturbing neighbor and it will take a great effort to make them quiet unless they are trained to obey their owner command to stop immediately.

Australian Cattles are for those who are not lazy and can take them out to do athletics activities as they need to exercise more often. Anyone with an apartment or small area can take the idea of owning this dog. They need a big place to run and chase and if they do not get to do this all, they start to become destructive. However, anyone who wants a watchdog who is protective, intelligent, athletic and energetic, this dog is for you.