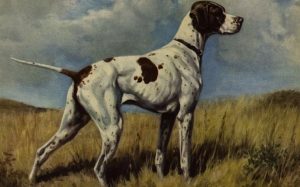 The Braque du Puy was a hunting breed that existed in France until the end of the 20th century. These medium-to-large-sized dogs were used for hunting in the French lowlands because of their speed and flexibility.

When it comes to appearance, the Braque de Puy dogs had a lean and athletic body, slim legs, and straight and long tail. They also had a flat-shaped head and had long pointed muzzle.

The Braque du Puy originated in the early 19th century in France by the French natives for hunting purposes. There are a lot of theories on how did this breed came to existence. Some believe that it originated by crossing a sighthound and a Braque Francais.

A different theory on the origin of this breed is that two brothers who had last names Dupuy or Du Puy first created this breed. It is said that they owned a female liver and white-colored Braque Francais.

Furthermore, they got a male Sloughi from a soldier which was later crossed to their pet dog. Therefore, the Braque du Puy is thought to have originated from the crossbreeding of those two breeds.

How Did The Braque du Puy Go Extinct?

The Braque du Puy is believed to have gone extinct by the 1970s due to a lack of conservation efforts and excessive crossbreeding. Though they were excellent hunting companions, they weren’t as popular and favored as other French Braques.

People choose other French dogs over Braque du Puy dogs as they didn’t know much about them. Instead, they tried crossing them with different other breeds after which the breed started disappearing from its original form. Moreover, the first and second world wars also had a heavy impact on the number of this breed. Hence, they became extinct around the late 20th century.

The Braque du Puy dogs had a loyal and affectionate temperament whereas their personality was calm and gentle. Their agility and intelligence was a major plus point while hunting chasing a game. Because of their strong scenting ability, they would track and follow the trails of the animals for a long time. And the fact that they wouldn’t get bored easily made them perfect companions.

Was The Braque du Puy Child-Friendly?

Yes, the Braque du Puy was a very child-friendly breed of dogs that loved being around children of all ages. Raised and bred for hunting, they were trained for being around people. Despite their hunting instincts, they would know how to play bite and socialize with children. So, they absolutely fitted as a family pet and would enjoy playing with kids.

The Braque du Puy was found in the following colors:

On average, a mother Braque du Puy used to give birth to 3-6 puppies at a time.

Visit Doglime if you want more information on other extinct dog breeds.