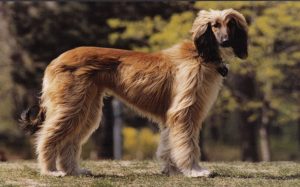 The Afghan Hound is a member of the sighthound family of dogs that are separated by its thick, fine, silky coat and its tail has a ring-like curl at the end.

Afghan Breed, also locally known as Tazi, was originated in Afghanistan bred for its unique characteristics in the cold mountains of Afghanistan.

The Afghan Hound is a very ancient breed of dogs which was originally bred in Afghanistan, Pakistan and northen India thousands of years ago. They are said to be reared by leaders like Genghis khan.

The Afghan Hound was primarily bred for hunting purposes and was used to kill animals like antelopes and even leopards. They also served as house guards and herd dogs.

According to Street Directory, the real beginning of the breed in the USA began with the first Ghazni imports back in 1931, when Zeppo Marx and his wife brought a bitch from England.

Asra, Omar and Badshah, altogether, formed the cornerstone of the breed of Afghan Hound in America.

Are these dogs child-friendly?

The Afghan Hounds are usually good and loving with children but have a low pain tolerance. If the children cause excessive pain to the hound, it is less likely that it won’t do anything.

It is better to rear the hound from the age of puppy with children that he/she’ll grow up together. Doing so will increase mutual bonding between them.

The Afghan Hound are playful as puppies, but as they grow up, they become very independent. They are playful and clownish and love running and galloping through yards and playing with their family.

Afghan Hound seeks the of their owner very they are much attention seeker. They are very athletic and love lounging around the house. They are of shy nature and hence not so friendly among us.

The tazi breed has a dramatic silky coat, an exotic face and is thin with fashion-build like body structure.

Afghan Hounds very stubborn and notoriously difficult to train and like a true , they don’t like being told what to do.

Afghan Hounds belong to the sighthound family of dogs. So, they have their own independent and complex personality and don’t like to be forced on to do something against their will.

It requires positive treatment and a lot of patience while working with this breed. As the hounds are both physically and emotionally sensitive, it requires a light hand on the leash while training them.

Here are some facts about the Afghan hound’s breeds.

Every dog has its own health issues and minorities that every dog owner should be aware of.

If you own an Afghan hound and are concerned about your dog’s health condition and the issues he/she may have, here are some health-related facts about them.

Some dogs are also found to have blue with black mask, black and silver and red domino brindle colors.

The Afghan Hound puppies are adorable cute little dogs that are demanded in almost ever corner of the world.

The puppies of Afghan Hound normally costs $2250-$6500 USD when bought from a legal dog breed store.

The Afghan Hounds have many similar breeds such as :

Greyhound and Saluki are also the most similar breeds that match the appearance as well as characteristics of afghan hounds.