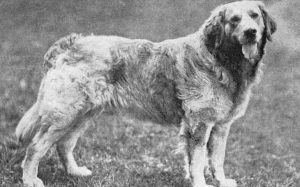 The Russian Tracker was a Retriever dog that existed in Russia until the early 20th century. They were large-sized dogs used by the Indo-Aryan people to protect and herd the flocks in the Caucasus Mountains.

The Russian Tracker had thick and taffy-colored double coat which protected them from the cold weather and harsh condition while hunting.

The Russian Tracker was originated in Russia somewhere around the early 19th century. Some say that the breed is of Central Asian or Caucasian origin. Nothing much about the Trackers are known besides their use as watchdogs.

They were bred and raised by the Indo-Aryans to herd and guard their flocks. It is believed that they were later crossed with other breeds to bring their features onto a new breed.

How Did the Russian Tracker Get Extinct?

The Russian Tracker got extinct in the late 19th century or early 20th century due to a lack of purpose and preservation. Though they were excellent watchdogs, people started using other dogs. Moreover, they didn’t show any interest in increasing their number.

Instead of conserving, the Russian Trackers were crossed with a number of other breeds like Bloodhounds through which a variety of new hybrid dogs came out. Their number declined as people preferred using other dogs in herding and protecting livestock.

Likewise, it is also said that they got extinct because breeders really didn’t have the idea which people owned the dog of the same breed. This made it impossible for them to multiply the number of these dogs and they vanished from existence soon.

The Russian Trackers were excellent watchdogs with intelligent and smart personality. Ancestors claimed that these dogs were so wise that they could keep themselves and their flock alive for months without any human help.

Talking about temperament, they had a calm, gentle, and friendly nature. Not only were they good with the flocks they were meant to protect, but they were also relatively nice with other dogs and pet animals. They were also brave as they didn’t fear to chase down wolves and other predators to protect the livestock.

Yes, the Russain Tracker was a very child-friendly dog that loved getting the attention of children. Like any other retrievers, they formed a special bond with kids and would also protect them if needed. Because of their affectionate nature, they adored being around kids of all ages. Therefore, the Russian Tracker was preferred a lot by families with children.

The Russian Tracker was found in the following colors:

On average, a mother Russain Tracker gave birth to 5-10 puppies at a time.

Check out Doglime for more information on other extinct dog breeds.