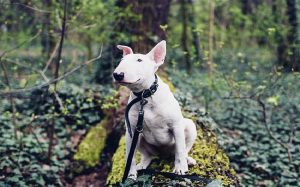 Bull Terriers are robust dogs with a -shaped head with pointed ears and small triangular eyes. These dogs are mischievous and are enough to entertain you. If you have a Bull Terrier in your house, that means you’ll never get bored.

Bull Terriers often called as Bullies thrive in the company of their people and should never be left alone. They are not recommended for homes who cannot give them enough time.

Bull Terriers was developed in England during century. Bull Terrier was created by crossing a with the white English terrier. Later, the bull and terrier dogs were crossed with Spanish pointers to increase their size.

Yes, Bull Terriers are child-friendly because Bull terriers are gentle, non-aggressive and probably knows how to treat a child. They are a best pair for kids of all ages. Bullies love entertaining their playmate with their clownish and insane humors.

Don’t forget to supervise your child as well as your dog while playing. Bull Terriers are rough players and may knock down a child unknowingly with their extra energy while playing.

Bull Terrier used to be very fierce and aggressive as they fought the gladiator wars in early days but if we see today, they are considered as one of the most lovable and gentle breed. The dogs are bred to be guardian dogs and will protect their family as long as they can.

Bullies are extremely loyal to their families. They love spending time with their loved ones as much as they can. However, it may be a problem since they should not be left alone for a long time. They prefer human companionship and may become aggressive and destructive when left alone.

Bull Terriers are over-protective towards their families and territory. They may tend to be aggressive towards the same sex of dogs. On the other hand, Bullies are often known as hard-headed canine. If you lack any leadership, they will not take a moment to rise up to the position and will start making their own rules and boundaries. They can sometime show dominant personality and may try to rule the house.

Bull Terriers are easy to train and the task should not be repeated as it can boredom to your pet which may lead to aggression. The obedience training is necessary with rewards and treats so that the dog will be ated.

There is no limit to what Bull Terriers can do if trained in an appositive manner with patience and humor. Bull Terriers have intelligence and can do any task easily since they are quick learners.

Hereditary Nephritis: It is a heterogeneous disorder characterized by syndrome.

Deafness: It refers to severe to profound hearing loss.

Heart diseases: It is a condition that involves narrowed or blocked blood vessels.

Skin problems: It is a condition that affects oil glands.

Lens luxation: It is a condition in which the lens shift inside or out of the eye ball.

Bull Terrier dogs can give birth to 5 puppies at a time.

The Bull Terrier has an average price of $1500 USD.

Some of the breeds similar to Bull Terrier are:

Visit Doglime to know more about different breeds of dogs.