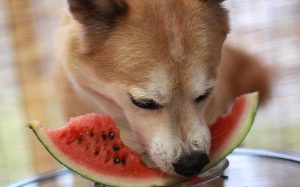 There are many benefits of feeding your dog watermelons. Since it contains citrulline and amino acids that increase nitric oxide levels in the body. However, you should know how much watermelons are good for dogs. As well as, the ways to feed them.

Yes, dogs can eat watermelons but with few precautions that should be considered carefully. Watermelons are rich in vitamins and nutrients that are beneficial for the health of the dogs. Having 92% of water, they can be a very good source of hydration on summer days. To add, watermelons do not have fat or cholesterol which is a big plus in eating them.

Why are watermelons good for dogs?

Surprisingly, watermelons are very healthy fruits. They have a high percentage of water (92%) and also provide other important nutrients such as Vitamin C and lycopene. These nutrients assure that the watermelons are not only low-calorie fruits, but are also good for your dog’s health.

Benefits of feeding watermelons to your dogs

Watermelons are very low in calories which is the greatest benefit for the dogs. Therefore, feeding your dog watermelons a lot of benefits for them.

How are Watermelons bad for dogs?

While watermelons have huge benefits for the dogs, they can also become bad for them as well. To clarify, the dogs can suffer from an upset stomach and possibly diarrhea after eating the watermelon rinds. So, they should not be let to eat the rinds of the watermelons.

Don’t necessarily think that removing seeds and rinds will solve the problem and you can feed as many watermelons as you want. Excessive eating of the watermelons will cause stomachache and diarrhea. Therefore, you should feed them in a few amount considering their health.

How frequently should you give Watermelon to your dogs?

No matter how nutritious fruit is, it should not be given in excess amount. As it is said that less is more, you don’t have to feed many watermelons to your dog. Depending on their diets, you should give them an amount of watermelons. It is best to consult your vet for better information.

Rinds are the hard and green part of the watermelons that are often called the cover of watermelons. No, your dogs cannot eat the watermelon rinds. While watermelon rinds do not contain any dangerous elements, but the texture and toughness of the rind might be problematic for the dogs. It may lead to minor issues like constipation and gastrointestinal upset.

4 thoughts on “Can Dogs Eat Watermelon? Benefits and Effects”