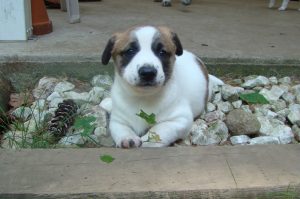 In this article you will explore all the various kinds of development stages, not only your puppies’ physical development but social and emotional as well.

Canaan puppies are completely helpless for at least 2 weeks. As they are born blind, deaf and neurologically underdeveloped. In addition, they would need to rely on their mother for milk and temperature.

Around the second week, their eyes start to open although they will not see everything clearly. By this time, their forelegs starts to grow stronger. Moreover, they continue to grow by adding 5-10% of their body weight.

The Transitional Stage – 2 to 4 Weeks

The transitional stage is a stage where there will be a lot of things going to happen. From this stage, the Canaan puppies will begin to show some personality traits. In addition, they can now stand, walk, and wag their tails by the end of this week.

The puppies may alsos try to jump out of the whelping box. Canaan puppies will start to spend time away from their sleeping area. The puppies start to interact with their siblings even more. Furthermore, they now being to practice social signals like, growling, pawing and tail wagging.

The Socialization Period – 4 to 12 Weeks

The socialization period is a wondrous period as the things which which the Canaan puppies will learn will last throughout their life. In this stage, it is very important that you socialize your pup with other people, dogs, and environments.

By the fifth week, Canaan puppies can bark properly and some might get noisy too by this age. Furthermore, by the sixth week, your puppy will start gaining around 9 to 10 kg per week. Moreover, by the eight week, your Canaan puppies are fully ready to soak up information making it the ideal time to begin training.

The Juvenile Stage – 3 to 6 Months

This stage begins between 14 to 16 weeks and ends at the onset of puberty. From this time, the Canaan puppies will start loosing their puppy face and resemble a miniature version of their adult selves. From the fourth month, their puppy teeth start falling out and they will become more mouthy.

During this stage, Canaan puppies will start to understand their role as a dog in the pack and would pick more cues. Just like human children, dogs behavior is also influenced by their playmates. In addition, the Canaan dogs are now beginning to understand rank, submission and dominance.

Socialization should be continued throughout the juvenile period to reinforce positive experiences. Canaan puppies will begin to demonstrate independent behavior. They may also try to dominate you which should be corrected. However, another fear period occurs around 4 months of age, so be ready for some motivation and encouragement.

Adolescence begins when your Canaan puppies reaches puberty, which typically occurs between 6 to one year. The female Canaan puppy will come into season for the first time. Similarly, male dogs starts showing interest in females. However, breeding at a small age could harm your dogs.

Your Canaan puppy now understands that he has a pack which consists of both humans and dogs. You can expect your dog to challenge you as he explores dominance attitude in him.

Puppy vaccines cost between 75-100$. However it also depends upon the vet clinic and the are you live in.

What Diseases Do Vaccines Prevent Against?

All in all, these were some information regarding the development stage of Canaan puppies. Large breed tend to mature slow as compared to small breeds. So, enjoy your puppyhood while it lasts!

One thought on “Canaan Dog Puppies”