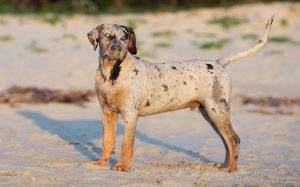 Catahoula Leopard dog breed is a medium-sized dog that was developed as a hunting dog. They were used for hunting wild boars and hogs. They were also sometimes used as a herding dog for livestock. Today it is kept as a family companion due to their affectionate and gentle temperament.

Catahoula Leopard is a native dog of the United States and state dog of Louisiana since 1979. They do not do well in an apartment or a small place. It is not suitable in city life and is happier to be on a farm herding cattle and livestock.

Temperament of the Catahoula Leopard

The temperament of the Catahoula Leopard is active, alert, and friendly. They are very alert of the activities around them and if they sense anything unusual, they tend to bark and warn their owner.

They are extremely hardworking dog that loves to play and help in your chores. Although Catahoula Leopard is a friendly dog, it is not suitable for everyone. They do their best only with an experienced dog owner.

Catahoula Leopard is a very energetic and active dog breed that thrives when they have a job to do. If they do not get enough activities to do or to help you in any household activities, they become anxious and destructive. They will start digging, chewing on stuff, and making unnecessary noises. So, they should be provided with enough exercise to keep them healthy and content.

Personality of the Catahoula Leopard

The personality of the Catahoula Leopard is loyal, watchful, and independent. They are devoted to the family and forms aa very close and strong bond with them. They are especially close to one specific person in the family that they see as their leader. If you fail to establish good leadership upon them, Catahoula Leopard will end of being your leader.

Use positive method f training by rewarding them with delicious treats and a lot of vocal praise. Start with basic obedience training and once they master it, enroll them agility.

Catahoula Leopard is a friendly dog with children that gets along with them pretty well. They are playful with them which makes them excellent playmates for kids.

Although they need to be supervised closely as kids might play rough and hurt your dog. Teach your children to behave around dogs and handle them with love.

Catahoula leopard is not an aggressive breed in general but they can show their aggression when on the field. They are protective of the livestock, their people and properties. So, if they sense threat towards their family, they are very likely to get aggressive.

How Does Catahoula Leopard Behave Around Strangers?

One thought on “Catahoula Leopard Behavior”