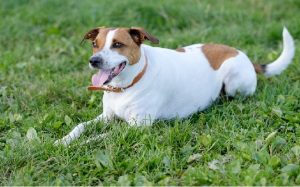 Danish-Swedish Farmdog is also known as Danish Pinscher which looks like Jack Russell in appearance and also has some similar temperament. They are a big dog in a small body with a high activity level. Danish-Swedish Farmdog exceeds at different dog sports including agility, tracking, and flyball.

Danish-Swedish Farmdog has short, shiny, and smooth in texture. They are small and have an almost rectangular-shaped body. After full body development that takes almost 3 years, they’ll have a wide, deep chest. The head is small, triangular-shaped with powerful jaws and the ears are folded forwards.

The Danish-Swedish Farmdog is originated in Denmark and the southern part of Sweden. This breed was recognized as a breed of Sweden and Denmark in 1987. Before 1987 it was simply called a Ratdog or a Danish Fox Terrier or Scanian Terrier. However, today they are known as Pincher than as Terrier.

Danish-Swedish Farmdog was a part of rural life as a working dog used to herd livestock, hunt rats and mice a few decades ago. While the people moved to cities, these dogs suddenly were disappearing. To save the breed from extinction, the Danish Kennel Club and the Swedish Kennel Club worked together. Danish-Swedish Farmdog became one of the newest national breeds in Denmark and Sweden after they got their new name.

Danish-Swedish Farmdog has a calm, tolerant and affectionate nature which makes them well-suited with children. They are active, playful and entertaining and makes a great playmate for children. Although they are tolerant of children, adults should always supervise them and teach their child how to approach dogs.

Danish-Swedish Farmdog has a lively temperament. They are very active and loves to participate in the day to day household activities. With their expressive personality, they have managed to be adored and loved by anyone who meets them. Danish-Swedish loves to be around his people, therefore leaving him alone for a long time is not a good idea. They can show destructive behavior and also have separation anxiety.

Always eager to play and of a full life, Danish-Swedish Farmdog makes an excellent family pet and also do very well with other dogs and cats. However, they are not to be trusted with pet birds and gunnie pigs as they have a high hunting instinct that leads to chasing and even killing.

Danish-Swedish Farmdog is a trainable dog. They are smart, active and always eager to please their owner, which make training them easier. Training should be short and entertaining to prevent any distraction from them.

They respond well to vocal praises and treats, so include delicious treats and use lots of word praises to keep encouraging them. Be gentle as harsh behavior and force hand can terrify them and they may not b able to focus on learning.

Danish-Swedish Farmdogs are generally healthy and are not prone to any serious health problem. Although they are likely to suffer from some canine health problems like other dog breeds. Some of the few diseases that they might face are listed below:

Danish-Swedish Farmdog has a short, smooth coat. Due to its short coat, they need only minimal grooming. They come in the following colors:

The average cost of a Danish-Swedish Farmdog puppy is between $600- $800 USD. Like many other dogs, however, adopting is a great idea to save some money and also providing a home for a homeless dog. Adoption cost between $300- $400 with the expenses of taking care of the puppy.