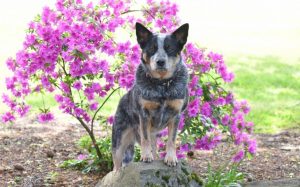 The dogs of these breeds are medium to large in size, the eyes are round and wide-set which comes in shade of yellow and brown, the ears are short to medium which are set high on the head. Their feet are round and similar to cats and tail may be of any length or sometimes docked for working dogs.

Origin of American Leopard hounds has been in existence for hundreds of year. Although the origin & history of this breed is still unclear, researchers suspect that they were brought to the United States by Spanish conquistadors to hunt hogs.

It was first recognized by UKC in 1998 as Leopard Cur, but later after ten years, the name was changed to American Leopard Hound. In 2012 the American Kennel Club (AKC) added this breed in its Foundation stock service.

Are The Dogs Child-Friendly?

The American Leopard Hounds are very intelligent dog breeds, they are extremely loving, affectionate and protective of children. They are very well-mannered and know how to interact with children.

They form a strong bond with children, they love to play and go for long walks with them and will guard them against strangers if necessary.

The American Leopard hound is very playful and loves to goof around its family. The temperament of this dog is loyal , the dog of these breeds are very protective and eager to please his family. easy and behave well with other dogs, but with other small pets in the home, he to be watched around, because of his hunting instincts.

Being , he can vocalize very well, but long, he may make your neighbor upset with his barking. The dogs of the breed do well family around, so important to be with them all times. However, it can be fix by purchasing another dog as they get along well with other canines.

The American Leopard hounds are intelligent breeds and are naturally eager to please their master, so training this breed wouldn’t be a big challenge, all you need is patience and positive reinforcement.

Firstly , you need to set rules and get stuck to it, and make it clear for the dog that you are the leader of the pack.

They tend to have an independent side, but with consistency that is not a big problem. You need to use positive training techniques and motivate them by rewarding treats when they do well.

Along with that you should also make sure that they are well socialized and all this starts from their young age too.

The American Leopard Hound incredibly rare dogs,  so it may be beyond your budget if you are first time owner. The puppies of this breed go around $1000+ each.

The similar dog breed of American Leopard hound are: