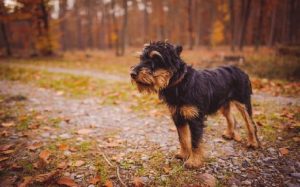 Jagdterrier is a medium-sized terrier dog from Germany. This breed is known by different names like Deutscher Jagdterrier, German Jagdterrier, and German Hunting Terrier. They are a highly active and energetic dog who is very hard working. They are apartment friendly who can live indoor as long as they are taken out for a walk regularly.

Jagdterrier has an alert and sturdy appearance. Their leg in proportion to the body. Their head is a bit long with either black or brown nose and deep, small, well-set eyes with a determined look.

Jagdterrier is originated in Germany in the 19th century as a hunting dog. Their ancestors are believed to be Old English Fox Terrier and Black & Tan Hunting Terrier. They were used for hunting small game and even big game like wild boar, fox, and badger. Jagdterrier was imported to Canada and America, where they were used as a tree dog by sportsman mainly to hunt squirrels and raccoons.

The United Kennel Club recognized Jagdterrier breed on January 1, 1993. The American Kennel Club has kept this breed in the Foundation Stock Service since June 2014.

Jadgterrier is tolerant of children and gets well with them. They are playful, so makes a great playmate. However, children might play rough sometimes that can lead to the dog’s aggressive behavior. So, supervision is necessary to avoid any kind of misbehavior from either party.

Temperament: The temperament of Jadgterrier is intelligent and courageous. They are fearless and can face anything that is bigger than its own size. Therefore, they make a great watchdog who can protect his family and their properties from any danger.

Behavior: Jadgterrier has a high prey drive which can lead him to chase any small or big animals on his sight. They do not get much well with other pet and may show aggressive behavior towards them. So, early socialization is necessary and s be raised together.

Personality: The Jadgterrier have athletic personality and are highly energetic, active who likes to be engaged in some kind of work. As a hunting dog, they should not be kept at home as a pet all the time. J should be taken out for trick game and hunting time to time to avoid their destructive behavior hen being bored.

Jadgteerrier is not a hard dog to train as long as you are patient and confident. He needs firm leadership and consistency. Positive methods of training are best while training your dog. Reward him with treats and praises so that he remains motivated. Do not keep the training session long and teach one task at a time while only jumping to next after first is completed.

Jadgterrier is mostly prone to genetic diseases known as lens luxation. They may also suffer from the following canine diseases:

Cost: The average cost of the jagdterrier is omehere between $300-$600 USD

Height and Size: The average height of the Jagdterrier is 13-16 inches. The average eight is between 17-22 pounds.