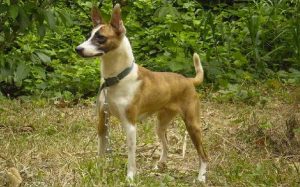 The Telomian Dog is a primitive dog and it is very rare that most people do not know about it. It is the native breed of Malaysia where people used it as a vermin hunter. It is a small to medium-sized dog with an athletic body that also has the ability to climb and run faster.

The body of Telomian is elongated, well-built, and proportionate to the head. The ears are v-shaped that are erect and give an alert look while the eyes are almond-shaped and set widely apart. Although not so popular, this dog makes an excellent family companion and also watchdog for a family.

Telomian Dog was originated in Malaysia that was used as a vermin hunter by the Orang Asli indigenous people of Malaysia. Despite keeping this dog by the Malaysian people as a hunting dog, they used to consider it a very unlucky dog that waits for the death of its master.

In 1963, anthropologist Dr. Orville Elliot discovered Telomian Dog and introduced them to the West. The breed got its name Telomian after it was first found in the Telom river.

A Telomian Dog Club was established in 1970 after a pair of Telomian dogs were bought to the United States. In 1973, another pair was bought and from then all the Telomian in the West descended.

Temperament: The temperament of the Telomian is sociable, well-adapted, and very alert. They get along with everyone in the family and if introduced properly, they are also welcoming of strangers. They tend to sound an alarm if they sense anything suspicious going in the surrounding.

Therefore, they make an excellent watchdog that will look after your house and people.

Behavior: As a hunting dog, the Telomians have a very high prey drive which is very hard to train out of them. Therefore it is necessary to keep them on a leash whenever taking them out and keep them in a fenced yard.

Personality: The Personality of the Telomians is devoted, friendly, loyal, and intelligent. They are very attached to their people and forms a strong bond with them. They are more attached to one particular person in the family that they see as the leader.

Training Telomian is not an easy dog to train as most of the domesticated dog. They are a very independent dog who can only be trained by an experienced dog owner.

Establishing a leadership upon them is tough, so start training them from an early age when they are eager to please their people. Always use a positive method of training by rewarding them with delicious treats and vocal praises as a source of motivation.

Telomain gets along with children if properly socialized but it is not recommended in a house with small children. They do well at homes with older children who know to behave around them and respect them. While letting them interact with small kids, make sure to always supervise them.

The Telomian Dog is a very healthy dog breed with few of the following possible canine health problems:

The Telomian Dog comes in the following colors:

Height: The average height of the Telomian dog is between 15-19 inches.

Weight: The average weight of the Telomian dog is between 18-28 pounds.