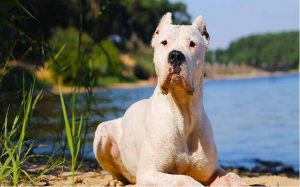 The large, muscular Dogo Argentino was bred for strength and hunting, especially for bringing down wild boars. The Dingo Argentino generally has a happy disposition and is fiercely loyal to their family. This breeds strength requires the active trainer who is capable of keeping big dogs in line. A strong fence in the wall is for the Dogo Argentino Dog.

Although Dogo Argentino was bred from fighting dogs, the aggressive traits were bred out so that it could cooperate with other hunting dogs. It is not natural for them to fight but some owner train them to do so anyway because of their strength and courageous nature.

The Dogo Argentino is a descended of Cordoba, a large fierce dog bred for fighting. A man named Antonio Nores Martinez began to use selective breeding and aimed to reduce the dog’s desire to fight and he worked to replace the fighting instincts with the need to hunt. ring because of its strength and fearless nature.

Yes, Dogo Argentino is child-friendly and loyal to their families and children However, children of another family may be more of a challenge as they do not take naturally to strangers.

Children should always be supervised with Dogo Argentino dogs. They should be trained on how to interact with animals to avoid incidents. Socializing Dogo and training them help to interact them to children and strangers.

Dogo Argentino dogs have a  high prey drive which can cause trouble when it comes to smaller pets including cats and other dogs. They may learn to interact with these animals if they are trained properly. This breed is most suitable for homes with no other pets.

The Dogo Argentino has a loyal breed behavior, making them excellent watchdogs. They are fierce defenders of their human families, even children but their strong prey-drive make them poor companions for other animals like cats or smaller dogs.

The Dogo Argentinos are independent dogs that need an experienced owner. They are strong-willed and need plenty of exercises and mental stimulation, so apartment living isn’t the ideal situation for them. It is best to begin training as early as possible.

The Dogo Argentino is a versatile breed; it has a dual personality. The Dogo can be the guardian of the family and will protect the family from strangers and if it wants can be a fearless hunter just like wild boar.

It is very important to start training the Dogo puppy as soon as he comes home to ensure a well-behaved adult dog later. It is integral not to wait for six months to start training as this might make it impossible to train your dog.

Dogo Argentino is an intelligent breed, but remember that harsh training will never yield results for you. A trainer must be sensitive to the issue and maintain patience when providing training to your dog. The other thing is that your Dogo will need training all through his or her life.

Some of the facts related with Dogo Argentino dogs are as follows:

Dogo Argentinos are generally healthy but like other breeds, they are prone to certain health issues. They are –

The Dogo Argentino is found in only one color that is White.

The Dogo Argentino cost about $1000-$4000 per puppy depending on the breeder.

Adult Dogo Argentinos have an average height of 30 -34 inches and weight about 35-45kg.

Some of the breeds similar to Dogo Argentino are as follows: