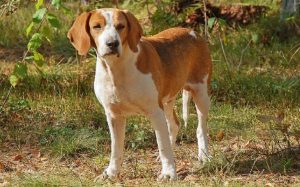 The English Foxhound is a dog breed that was originated in England, Great Britain in the 18th Century for the purpose of developing a determined, strong and fast hunting breed.

The large-sized and medium-energy having English Foxhound is the rarest foxhound breed and is very few in number in comparison to other foxhound breeds.

Where did the English Foxhound originate from?

According to AKC, the traditional British foxhunt began in the 1600s with packs of bawling hounds and mounted hunters. “Masters of hounds” developed a foxhound breed by breeding big stag-hunting hounds with leggy Greyhound-type hounds.

As a result, the English Foxhound was formed with a cold nose and endurance as well as great speed and agility. The Breed became popular as time passed by and people of royalty began to buy these dogs for packs.

Some historians claim the initial development of the English Foxhound started back in the 13th century. The American Kennel Club listed this breed officially in 1909, however, it is still not popular as a pet or show dog.

Yes, the English Foxhound is a very child-friendly breed. They are friendly and gentle with the kids. The sweet dogs get along with the kids very easily and share a friendly bond with each other.

They are originally a hunting breed, so it is obvious for them to show their hunting instincts. So, it is very important to keep eyes on your children and the dog while they are playing together.

The English Foxhound is a very friendly breed with sometimes being as stubborn as their will. They will bay and howl at nights and when left alone. Separation is something that this breed does not like.

The English Foxhound dogs have a curious and playful temperament. Early socialization and training are very important to avoid the dog from having separation anxiety.

Talking about the personality, the English Foxhound is an active, athletic and energetic breed. They have mentality and like to live in with other dogs and pets.

As most of the hound breeds, the English Foxhound are very easy to train. They don’t have the longest attention spans which means the training should be conducted short and non-repetitive.

Originally bred for hunting, these dogs will enjoy going on long walks, jogging and hiking with their owners. Their inborn intelligence and skills will make it easier to train them.

Sometimes, the English Foxhound can be very stubborn, not willing to obey his master. At that time, you have to establish leadership with your dog and make him realize that you run the show not him.

Facts about the English Foxhound

Here are some of the facts about the English Foxhound breed that you might want to know:

Common Health Issues that is seen in the English Foxhound breed

The average life expectancy of an English Foxhound dog is 9 to 11 years. And during this lifetime, it suffers from various health issues. Some of them are given below:

Epilepsy is a very chronic disorder which causes recurrent seizures in the brain of the dogs.

Hip dysplasia is a hereditary disease seen in the dogs which caused by the malformation of the hip joints.

Deafness is a condition where the dog will stop listening anything. Most of the dogs get deafness problem as hereditary characteristic. In such condition, the dog might seem to be ignoring you though his ears seem fine.

The English Foxhound are found in three colors. They are white, lemon & white and tri-color.

The height of an English Foxhound is 53–63 cm approximately and the weight of 25-34 kg.

Here are some dogs that are similar to the English Foxhound according to Animal Planet: