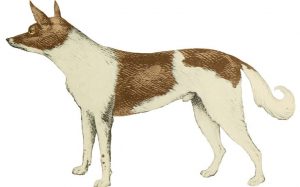 The Fuegian Dog is an extinct breed of a domesticated fox that lived in Chile and Argentina till the early phase of the 20th century. These medium-sized dogs were a domesticated form of the Culpeo, a South American fox species.

The Fuegian Dog had a sharp snout, erect ears, and a thick tail. As they were domesticated from the fox species, they were more similar to foxes than dogs.

The Fuegian Dog originated somewhere around the 16th century in Chile. The Selk’nam and the Yaghan natives kept these dogs and used them in hunting animals like otters. Moreover, these dogs also served as a source of warmth as they huddled together with their masters and provided warmness.

Lucas Bridges, an Anglo-Argentine author-explorer, described this breed as a stunted cross breed a wolf and an Alsatian police dog. Furthermore, Captain Martial, who led the 1883 scientific expedition to Cape Horn, described it as an ugly fox-like looking dog with a sharp snout and long tawny hair.

How Did The Fuegian Dog Become Extinct?

The Fuegian Dog became extinct in the early 20th century when they were exterminated by the Yaghans native. In 1919, the Silesian missionary Martin Gusinde was shocked to find out that these dogs were gone from the lands of Argentina and Chile.

The main reason behind the extermination of the Fuegian Dogs was their fierce nature. To clarify, they started becoming dangerous to both men and cattle. Anglican linguist and missionary, Thomas Bridges, wrote in the 1800s that these dogs attacked his pet goats. Therefore, the breed was eradicated and went into extinction.

The Fuegian Dogs were affectionate and brave dogs but weren’t preferred much because of their loyalty problem. Yes, their loyalty was a topic of question because most of them proved to be disloyal to their owners. Julius Popper, an Argentine mass murderer/explorer, said that she never saw these dogs become aggressive or try to defend their masters when they were in danger.

Though the Fuegian Dogs weren’t loyal to their owners, they possessed a dangerous behavior. They were vicious at attacking animals whenever they wanted. Therefore, it was really important to keep them on leash.

Was Fuegian Dog a Child-Friendly Breed?

No, the Fuegian Dog wasn’t a child-friendly breed because of its independent and disloyal nature. No one knew when they would play with kids one time and attack them moments later. Hence, these dangerous dogs were never ideal companions for kids.

The Fuegian Dog was found either in tawny or entirely white color.

On average, a mother Fuegian Dog used to give birth to 5-8 puppies at a time.

Check out Doglime if you want information on other extinct dog breeds.