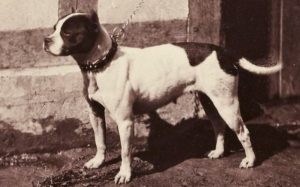 The Bull and Terrier, often written as bull-and-terrier is an extinct breed of crossbreed dogs. It is the progenitor of several modern breeds like American Pit Bull Terrier, Bull Terrier, American Staffordshire Terrier, and Miniature Bull Terrier.

The Bull and Terrier was a medium-sized dog with short-coated and muscular body. Their ears were pointed towards front and had slightly long skulls.

How Did The Bull and Terrier Become Extinct?

The Bull and Terrier became extinct around the 19th century because it no longer remained a pure breed. In 1860, this breed was divided into two different categories: the pure white terrier and the colored ones. Following the split, breeders focused on developing the types only. Also, they didn’t care much about the original bull-and-terrier breed.

Therefore, they became extinct by the end of the 19th century but their predecessor breeds are still living.

The Bull and Terrier had a ferocious, aggressive, and intelligent temperament. Their agility and intelligence helped them learn new fighting tasks easily. There were very few tasks that they couldn’t do and other dogs would do. Moreover, their independent and bold personality made them want to run their pack themselves.

Was Bull and Terrier Good For Children?

No, the Bull and Terrier wasn’t a breed that people owned for their children. The fact that they were used in dog-fighting and bull-fighting made them possess a very vicious attacking instinct. So, these dogs would easily cause harm to small children with or without such intentions. Therefore, they were not kept by families with kids.

The Bull and Terrier was found in the following colors:

On average, a mother Bull and Terrier dog used to give birth to 3-12 puppies at a time.

Check out Doglime if you want to know about other extinct dog breeds.