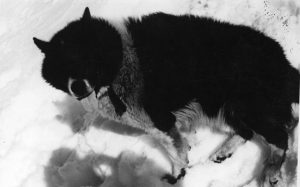 The Argentine Polar Dog is an extinct Argentinian dog breed that existed till the late 20th century in Argentina. These large-sized dogs were used by the Argentine armies to equip and protect their Antarctica bases.

The Argentine Polar Dog had a giant body with thick and double-coated fur. They also had four sharp teeth or fangs which helped them cut and tear flesh easily.

The Argentine Polar Dog originated in the mid-20th century in Argentina. It got created by mixing breeds like Alaskan Malamute, Greenland Dog, Manchurian Spitz, and Siberian Husky. As Argentina began to identify itself as a bi-continental country, the Argentine army desired to reach the south pole.

In the 1950s, General Hernán Pujato brought the sled dogs along with him from Greenland and Alaska. After that, a team of more than thirty non-commissioned officers started an effort to create the breed. They needed a dog which could carry heavy loads, travel long distance easily, and was easy to breed.

The Argentine Polar Dog met all the requirements of the Argentine army. They were excellent means of transportation and protetction because of which the breed thrived across the military tribe.

How Did The Argentine Polar Dog Become Extinct?

The PEPAT treaty forced the breeders to take these dogs out of the Antarctica. As they were used to living and working in the cold regions of Antarctica, they didn’t serve much purpose outside it. Furthermore, breeders of other countries didin’t really about this breed as they had other alternative breeds. Therefore, they got extinct in the late 20th century.

The Argentine Polar Dog had a loyal, friendly, and affectionate temperament. Since they were trained to transport people from one place to another, they knew how to behave with strangers and new people.

The Argentine Polar Dogs were also so protective that they didn’t back to defend their owners from wild animals or intruders. Their giant-like body and trustworthy nature made them perfect allies for journeys.

Yes, the Argentine Polar Dog was a child-friendly breed because of its wide use as a guard dog. They adpated very well with children if raised from an early age. However, their massive body and fierceful teeth were something to never compromise with. It was very necessary for the parents to keep an eye on the kids whenever they were together.

The Argentine Polar Dogs were found in the following colors:

On average, a mother Agrentine Polar Dog gave birth to 4-6 pupppies at a time.

Visit Doglime if you want to about other extinct dog breeds.