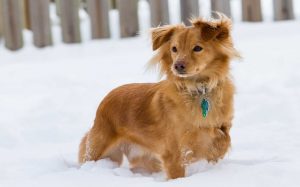 The Golden Dox is the mixed breed of Golden Retriever and Dachshund. It is a medium-sized dog that got mixed traits from both of its parents. It is also known as Golden Weenie Dog and Golden Retriever Dachshund mix.

It is a sweet, loving, and loyal dog that does great as a family companion of all age people.

Temperament: Golden Dox is a well-tempered, playful, loving dog that is best with the family with old people as well as small kids. They are good with other pets too but need to be raised together. It loves to cuddle on the lap but also loves taking a long walk with its active owner.

Behavior: As Golden Dox is playful and happy when being with its people, it can get depressed if left all by themselves. So, to avoid any kind of destructive behavior from it, always keep a companion for them even a house pet. This will keep them contained and they will not be anxious.

Personality: The Golden Dox has got a mixed personality. It has the stubbornness of the Dachshund but the gentleness of the Golden Retriever. They are a highly sociable dog that is welcoming of the guest and visitors in the house.

While it is a friendly dog, it is also alert and will bark waring there owner at an unusual sight but are not likely to get aggressive.

Golden Dox can be mischievous sometimes which makes training them difficult. So, a firm and consistent leadership are required from a very young age.

Start from obedience and basic training and once they master that, slowly move to agility and advanced training. They tend to respond well to positive methods of training, so reward them with delicious treats and lots of vocal praises.

Yes, Golden Dox is a friendly dog that gets along with family children very well. They are also friendly with children they are not used to but needs to be introduced properly.

They are highly energetic which makes them an excellent play partner for kids. Children can play rough sometimes, so they need to be taught to behave around dogs. There playtime and interaction should always be guided and supervised properly.

Since Golden Dox is a hybrid, it can face some genetic health problems that it inherits from its parents. The average life span is between 10-14 years.

The Golden Dox comes in different combinations of colors.

Height: The average height of the Adult Golden Dox is between 10-23 inches.

Weight: The average weight of the Adult Golden Dox is between 30-60 pounds.