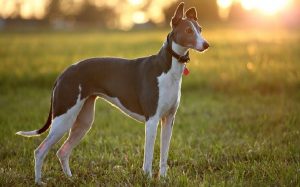 The Greyhound is a sighthound breed of dogs that originated in England, British Isles and is quite popular as family pets. They were used for hunting hare, foxes and deers.

The Greyhound dogs are well known to be aloof with strangers, but are very affectionate when they are with their loved ones and their family members.

Greyhound dogs have been well known in many countries of the world over the past centuries and have evolved as years passed by. The Spanish explorers brought Greyhounds with them in the 16th ry.

The Prussian military officer who helped George Washington to whip the Continental Army into shape, Baron Friedrich von Steuben always had a large Greyhound with him which was named Azor.

Greyhounds were among the very first breeds that were exhibited in dog shows in the United States and Britain. The AKC recognized the Greyhound breed in 1885 and it is currently ranked 139th of all the breeds registered.

Yes, the greyhound is a very child-friendly breed that is very gentle and calm around children. They have not been much with children, so they are not likely to hate kids near them. They enjoy the company of kids.

As the Greyhounds are even tempered and quiet, they are not expected to harm the kids. If you want a dog for your kids, the Greyhound can be a great one to pick.

Greyhounds are usually gentle dogs that love playing with their owners and having a quality time with their mates. They are calm and quite obedient breed that thrives on affection.

Greyhounds are aloof and indifferent to strangers, but that doesn’t mean that they are shy. They are very much playful and affectionate with their preferred people.

Talking about personality, the Greyhounds are very quite and gentle. They are tolerant with non-aggressive nature and will usually walk away from the people if bored rather than snapping or growling.

Training a Greyhound is not so difficult but not so easy too. They are intelligent as well as calm dogs that obey their masters. Though they might act stubborn sometimes, they respond quite well to firm and consistent training.

The dogs like to go on long walks rather than sleeping all day. You can take them to jog, hike and walks with you. They’ll show extremely impressive results if trained with positive reinforcement on a daily basis.

Facts about the Greyhound

Below are some facts about the Greyhound breed:

Living an average life of 10-12 years, Greyhounds suffer from various health issues. Some of them are as follows:

Osteosarcoma or Bone cancer is the most common which affects the bones of Greyhounds. Greyhounds is the breed to be diagnosed with Bone Cancer mostly.

Bloat or Gastric Delatation is a condition when the stomach twists and then gets filled with gas.

Lyme disease is a disease caused by the infection with bacteria Borrelia burgdorferi sensu lato. Dogs get them by a bite from an infected black-legged or deer tick.

Greyhounds are found in six different colors. They are mentioned below:

Here are some dog breeds that are similar to Greyhounds on the basis of their height: