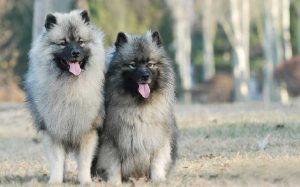 The Keeshonds are beautiful dogs with long straight fur and adorable eyes. These dogs are always happy and sometimes clownish. The Keeshond will do anything to grab your attention.

Keeshond can be a good choice for families with children. If you want a dog who are sturdy with minimum exercise session then these breed may be the right choice for you.

The Keeshond are ancient breed originated in Holland in the early 14th century. They were developed crossing between, Samoyed, Siberian Husky, Norwegian Elkhound, Finnish Spitz, Chow Chow and Pomeranian. During the 14th and 15th centuries, they were preferred by farmers as guard and watch dogs.

In the 17th and 18th centuries, they were used as jack-of-all-trade dogs in European farms, barges, and riverboats. They were extreme barkers and great guard for children too. Not only these, but they were also skilled at herding livestock, killing rats, and vermin.

The first Keeshond was registered in the American Kennel Club in 1930, under the breed name ‘Keeshonden’. The Keeshond Club of America was later found in 1935.

No doubt! Keeshond are extremely good with kids. He’s playful and lively with kids of all ages. If given a chance they will play the whole day running around with kids. Since they are attention seekers, they think this is the right way to grab anyone’s attention.

Keeshond knows how to handle and treat a child. They will become very gentle and tolerant around kids. Kees is also very protective of their playmate.

Keeshond is very well behaved dogs. They know what makes their owner happy and what makes them sad. Kees never aggressive rather they are very friendly, lively and loving with everyone even with strangers.

Kees is very smart, intelligent and affectionate with cuddly and clownish behavior. They always want to be the center of attraction and are happiest when get a chance to participate in family activities.

The fluffy dogs are great eaters meaning, they are very fond of eating and will never refuse any treats when given. They are recognized as therapy dogs for autistic children which isn’t a surprise since we all know their love for children is legendary.

Separation anxiety is a common problem in Keeshond. Since they love being in a pack, it is not safe to leave your Kees alone for a long time. They may become extreme barkers, chewers, and aggressive.

Keeshond is quick learners and are known to be in-tune with their trainers. However, they can somewhat be strong-willed and independent which can affect their training making it hard. Positive reinforcement and lots of praise followed by tasty treats might help and encourage them to follow the cues.

Keeshond won’t mind repeating the same task again and again until and unless they’re being offered treats as we have already discussed that they are great eaters.

Keeshond is a fairly healthy breed but you will need to prevent your fluffy from overweight. The Kees will enjoy the life expectancy of 12-15 years.

Epilepsy: Epilepsy is a neurological condition that is often but not always inherited. It can cause mild or severe seizures that may show unusual behaviors hiding, chasing or running frantically as if being chased.

Allergies: Allergies are common in every dog breed and Keeshond is no exception. There are three types of allergies: food allergies, contact allergies and inhalant allergies.

Cataracts: Cataracts cause opacity in the eyes, resulting in poor vision. This condition usually occurs in the old age and can be removed by surgery to improve vision.

Always buy a puppy from a reputable breeder to get the best version of your pet. The pure breed of Keeshond will cost you $1,100 – $4,000.

The Keeshond will give birth to 3-8 puppies at a time.

Height: The Keeshond will stand up to 17-19 inches tall.

Weight: The average weight of the Keeshond is 35-45 pounds.

The Keeshond is found in five colors.

Which Breeds Are Similar To Keeshond