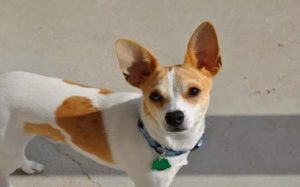 The appearance of Jack Chi is the mix of both breeds. It is small to medium in size with a short neck and dense coat. It can either get an elongated muzzle like that of Jack Russell or a thin and short like that of the Chihuahua. The appearance depends on the amount of gene that they share to form a Jack Chi.

Jack Chi does not do well with small kids and can show aggression towards them if not raised together. Although, they do great with older children who can handle them and be gentle with them. Therefore, proper supervision is necessary when they are interacting with small children.

Behavior: The Jack Chi can be aggressive towards strangers and can even bite them if not socialized properly at an early age. As an active dog, they need regular exercise for some time to keep itself fit and occupied. If it does not get the required exercise, it can become destructive.

Personality: The personality of Jack Chi is confident, fun, and lively. They can be a great companion in a family with active people. They love to play and run here and there, so they need a yard where they can satisfy their needs.

Training Jack Chi needs a confident and patient dog owner who can train them with consistency. If early leadership is not developed on them, they will start to take themselves as a pack leader. They tend to respond well to positive methods of training, so reward them with delicious treats and lots of vocal praises. It will encourage them and motivate them to be focused on the training.

Jack Chi is a hybrid breed that can face some genetic health condition like following.

Glaucoma: The inflammation of the interior of your dog’s eyes that causes inadequate of the fluid drainage is called Glaucoma. Your dog can even lose its vision. Consult a vet for proper treatment of the disease.

Patellar Luxation: The conditions were the kneecap of your dog is dislocated is called patellar luxation. This condition is usually developed in 4 months of age. It is not a completely curable disease but through surgery, it can be somewhat controlled.

The Jack Chi comes in the combination of the following colors:

Size: The average height of the Jack Chi is between 10-12 inches and the average weight is between 8-18 pounds.

Cost: The average cost of the Jack Chi is between $200-$800 based on the breeders quality.