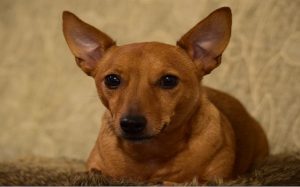 Jackshund is a designer breed that is developed by crossing Jack Russell Terrier and Dachshund. Both of the parents are small in size and so the Jackshund also comes in a small size.

The combination of these two breeds is a fun, energetic Jackshund that does best in the house with active people. They are suitable for an apartment life too but need to be involved in regular exercise.

Temperament: The temperament of the Jackshund depends on the environment it has been raised on and on its parent. It has a mixed temperament where it obtains intelligence and energy from Jack Russell Terrier. It adopts the playful and affectionate temperament from Dachshund.

Behavior: The Jackshund craves for the love and attention of its people. They love being with them all day either playing or just sitting by their side. So, if they are left alone for a long time, it is obvious to encounter its destructive behavior like barking and chewing on things. So, it is not a great idea to leave your Jackshund all by itself for a long period of time.

Personality: The Jackshund have a friendly, happy and sometimes stubborn personality. They are outgoing, playful, and always curious, which can sometimes lead to trouble. They are likely to get along with other pets in the house if raised together from an early age.

Yes, Jackshund is a child-friendly dog that gets along with kids pretty well as they are playful and makes a great playmate for small kids. Children can play rough sometimes, which your Jackshund might not tolerate, so proper supervision is necessary. Also, teach your kids how to approach the dog and to behave around them.

Jackshund is a very intelligent dog breed but it can be stubborn sometimes. Therefore, establishing a firm leadership at an early age is necessary. Start obedience training when they are still young and slowly move to advance training once they master basic. Reward them with delicious treats and lots of vocal praises as a source of motivation and encouragement.

The Jackshund is a mixed breed, so it can inherit some of the genetic health problems from its parent breeds. It has a life expectancy of 11-13 years.

The Jackshund comes in the mixed of the following colors:

Height: The average height of the Jackshund is between 8-13 inches.

Weight: The average weight of the Jackshund is between 15-28 inches.