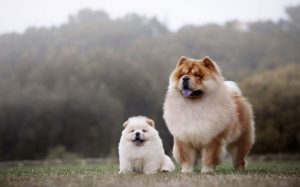 The scowling expression breed that looks like a teddy bear at the first glance is Chow Chow. It is a large dog with unique features like blue-black tongue and straight hind-legs that gives it stilted gait.

It makes a great house pet and also does well in an apartment as it is not much active dog. If you are an introvert then Chow Chow is just the right breed for you.

Chow Chow has a sturdy and powerful built with a lion-like ruff around their neck. They are muscular, have heavy bones, the body is broad and square-shaped. They have two coat variety that is smooth and rough, both are double-coated. It is thick, wooly and the tail feathery.

Chow Chow is known as one of the oldest dog breeds. It is believed to be originated in China somewhere in 206 BC. They have a long history and they have played a various role during that time. Chow Chow was the lordly companions for nobles of China. They were also used as guard dogs, hunters, and haulers.

History also says that the Chow Chow ancestor was used as the source of protein. They were nicknamed as edible dog where the name Chow was derived from the Cantonese word “edible.”

The American Kennel Club recognized Chow Chow in 1903 as the member of the non-sporting group. It ranks in 75th (as of 2019) position out of 193 AKC registered breeds. In 1906, the Chow Chow Club of America was formed.

Chow Chow is fine with children if raised together. They do not mind being with small children but kids might be disappointed when they see Chow is not much of a cuddler or a hugger. They are not so friendly with kids they don’t know. Therefore, while taking out, keep them on the leash and also exposure with kids at an early age is necessary.

Always supervise your kids and Chow Chow’s interaction as kids might play rough and your dog will show aggression towards them.

Temperament: The temperament of the Chow Chow is serious, dignified, and independent. They form a very strong bond with one particular person in the family but are also affectionate with other family members.

Chow Chow is an aggressive dog that is very protective of its family and will not sit still if some harms come to them. Therefore, they make an excellent guard dog.

Behavior: Chow Chow is not a very active dog but if you are keeping it in an apartment, daily exercise is necessary to keep them healthy and fit. If you start exercising them from an early age, it becomes a habit and they will be more assertive with their owner.

Personality: The personality of the Chow Chow is reserved and alert. They are very alert of the activities going on in the surrounding and are watchful of every person that crosses the property.

They are very aloof of strangers so a proper introduction is necessary. It tends to show aggression towards other dogs but is generally good with household pets.

Training Chow Chow is challenging as they have a mind of their own and does not like taking orders from others. Establish a firm leadership at an early age so that they become obedient and see you as their leader. Be patient with them and train them with consistency. They tend to respond well to positive methods of training to provide

The Chow Chow can have the following possible health condition during their lifetime:

The Chow Chow comes in the following colors:

Size: The average height of the Chow Chow is between 17-20 inches adn the weight is between 45-70 pounds.

Cost: The average cost of the Chow Chow puppy is between $900- $1200. The price may vary from the quality of the breeders.