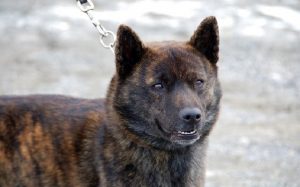 The Kai Ken is a hunting dog of Japan which is athletic, strong, and an excellent swimmer. They are a rare breed of Japan which got its nickname as Tora Inu in its native land, Japan. This means “Tiger Dog” as they have stripes like tigers on their body.

The Kai Ken is a well-muscled, medium-sized dog with an athletic and sturdy appearance. They are double coated with a short length and soft undercoat. The outer coat is harsh and in medium length. The head is of square-shaped with smiley eyes and alert ears. Kai Ken is suitable for apartment also but should be taken out for a walk or a play regularly.

Kai Ken is a native of Japan, originated in the mountainous region of Kai territory near Mount Fuji. This breed was kept isolated in the mountain area and it was discovered in 1929. It was originally used for hunting small as well as big game from pheasant, rabbit to wild boar and bear.

Kai Ken was recognized by Japanese Kennel Club in 1934. The American Kennel Club has kept this breed in the Foundation Stock Service since 1997.

Kai Ken gets along with children very well and is best suited as a family pet with kids. They are gentle and tolerant of children, especially if they are raised together. However, like with every dog, children should be supervised and taught to approach them and behave around them.

Temperament: Kai Ken has a keen temperament. They are very active and intelligent breed who loves human company and want to be part of their activities. Kai Ken is not an aggressive dog and generally get along well with other pet if introduced properly and socialized.

Behavior: Kai Ken sometimes shows quite stubborn behavior but it can be trained out of them. They are bit reserved around strangers and are wary of them. However, they can be made welcoming of them with proper training in socialization.

Personality: Kai Ken is a loyal and affectionate dog. They are very devoted to their family and need a good amount of love and attention from their owner. They are hunting dogs and are usually aware of the activity in the surrounding which makes them a great watch and guard dog.

Kai Ken is not very independent and is eager to please their owner which can make training easy. They can be stubborn sometimes but with firm leadership and confidence, they can be trained. Apply positive methods of training where treats and praises are involved as a reward for the task they complete. Keep the training session short and interesting so they don’t get bored and distracted.

Cost: The average cost of the Kai Ken puppy is between $1500- $2000, depending on the type of breeder. Adoption cost usually $300 USD with the expenses on puppy.

Height and Size: The average height of the Kai Ken is 15.5-19.5 inches at the shoulders. The average weight is between 20-40 pounds.