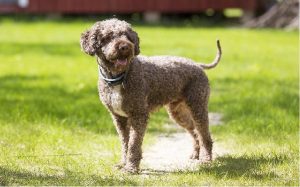 Lagotto Romagnolo means “lake dog from Romagnolo”, these dogs were bred to hunt waterfowl through the wet marshlands of Romagna in Italy. They are also called Italian Water dogs and Romagna Water dogs.

Owners can easily train Lagotto Romagnolo dogs to use their super noses for scent work and Lagotto Romagnolo’s’ thick coats help them stay warm in fall and winter while protecting them from thrones and debris as they run through forests.

Lagotto Romagnolo dates back to the Renaissance in Italy and goes even farther back than that. These dogs were originally bred as hunting dogs to help retrieve waterfowl in the marshlands of Romagna.

In the 1970s, these breeds were almost extinct. However, Italian dog lovers have a huge hand in preserving the Lagotto Romagnolo breed. In the year, 1988, the Club of Lagotto was founded and was officially recognized by the American Kennel Club in 2001.

Lagotto Romagnolo is playful and have high exercise needs, but it is important to make sure they don’t play with much excitement or they may risk knocking small children.

The behavior of Lagotto Romagnolo is known for being smart and lively They are agile, intelligent and playful which makes training easy as well as suitable for all types of homes. It enjoys the company of its family and sticks close to them.

Lagotto Romagnolo makes it suitable for families because they are sturdy, active and typically loving towards children. Their temperament can be described as happy, gentle and lively. They are usually not aggressive to anybody whether people or other animals.

The Lagotto may look like a plush toy, but it is actually a robust athlete. This breed needs plenty of exercises and mental stimulation to remain healthy both physically and mentally. They are energetic but not overly hyper and bond deeply with families. These breeds have sweet and affectionate nature for everyone and are not always suspicious of strangers until they sense any unusual.

The desire to please their owners and high intelligence make them easy to train. They are not stubborn or strong headed. However, they will reply only on the soft tone of the voice while training. They are sensitive dogs and will not rely on the harsh tone.

Lagotto Romagnolo is prone to certain health issues which are given below:

Lagotto Romagnolo dogs can give birth to 4 to 6 puppies.

The male Lagotto Romagnolo’s height is from 43 to 48 cm and the females will stand relatively lesser, from 41 to 46 cm.

The average weight of the Lagotto Romagnolo dog breed is 13-16 kg.

Which Dogs Breed Are They Similar To?

Some of the breeds similar to Lagotto Romagnolo dogs are as follows: