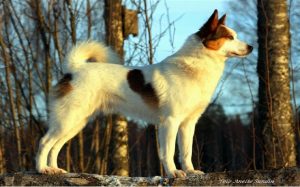 Norrbottenspets are not large dogs but their tough, sinewy bodies are built to withstand punishing terrain and harsh climates. They are small-sized Spitz-type hunting dogs.

Norrbottenspets are extremely agile, rugged and weatherproof with a fearless attitude, also they are kind and affectionate companions at home. They show no extremes in physical characteristics because they must do all things well.

Norrbottenspets meaning is spitz from the country of Northern Bothnia and probably originates from small Laika type spitz. It is said that these were known to live with hunting people in the North Cape area in historic time.

Yes, Norbottenspets dogs are child-friendly because they are kind, playful and lively with everyone. Also,

Never let your child pull the tail or ear of the Norrbottenspets dogs because they might bite the children while the dogs are sleeping or taking food. As with every breed, proper supervision is a must while leaving your child alone to play. They might become super excited and may become rough players.

The behavior of Norrbottenspets is calm, keen, confident and is not aggressive with the people around them. These dogs love human counterparts and as well as the company of other animals. Norrbottenspets are not great watchdogs due to their friendliness nature towards everyone.

Norrbottenspets temperament can be defined as affectionate, sensitive and protective towards their family. They need enough time to spend with their family. Since they are sensitive dogs, they tend to develop separation anxiety when left alone for a prolonged period.

Norrbottenspets are highly smart and intelligent, so they are known as quick learners and are easy to train. But, these dogs can become bored if the commands are repeated. The training should be consistent and most importantly, patience is needed while training a Norrbottenspets. Short sessions of training are recommended for these breeds which can help them keep it interesting and fun.

Norrbottenspets is a healthy breed but with increasing age following health problems will occur in this type of breed:

Norrbottenspets can give birth to 3 to 4 puppies.

The average cost of the Norrbottenspets puppy is about $500 to $700 USD.

The average weight of the Norrbottenspets is around 8 to 12 kg.

The Norrbottenspets will stand up to 42-46 inches tall.

Which Dog Breed Are Norrbottenspets Similar To?