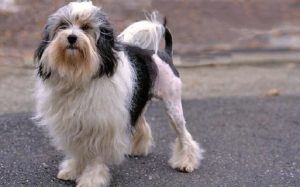 Löwchen, which is also known as a “little lion dog” is a small dog bred for the purpose to give love and get love in return. They are a very fun dog who loves to be with their family playing or cuddling. It is said that Lowchen barks at any pets and any strangers but if they come close, they will just wave their tail and want a gentle pat from them.

The appearance of Lowchen is like a lion but in a smaller version. The head is broad and always held high like a proud dog. Their muzzle is short and slightly rounded. The eyes are round, dark and set wide, whereas the ears are pendant and covered with hair. They have a long flowing mane and have a high set feathery tail.

After World War I, Lowchen was considered as one of the rarest breeds. In 1973, Guinness World Records stated that Lowchen was rarest dog breed in the world with only 65-70 total recorded. However, Madame M. of Brussels of Belgium started the program to save Lowchen and soon the number increased. After her death, Dr. Hans Rickert, a German veterinarian continued the work of saving Lowchen.

Lowchen does great as a companion with both older and younger children. They are unexpectedly gentle and loving with them. They like to be around them playing most of the time. However, children should be supervised and taught to be gentle. If they play rough, Lowchen might try to defend him by biting or snapping.

Temperament: Lowchen has a positive and out-going temperament. They are very friendly and welcoming of both pets and strangers. They have a high barking tendency so if they see anyone or anything, they just start barking. However, if that person comes near and becomes gentle with him, he makes him his friend. Therefore, Lowchen does not make a great guard dog but can be a good watchdog as they will alert you if is approaching.

Behavior: Lowchen love to be around people, so if they are left alone for a long time, separation anxiety can be seen in them. They are also quite an excessive barker. Lowchen barks at the sight of any strangers approaching and will warn their owner of the strangers coming in the house.

Personality: The Lowchen have a lion-like personality but they are not a fierce breed. They are outgoing, lively and playful. They love the people of all ages and get well with everyone well. Lowchen loves to be with people and does not do well in the kennel. They expect to be invited in to sleep with people.

Lowchen is a people pleaser, so training them is easy as long as you can establish firm leadership on them. They are smart and can learn a trick rather quickly. Positive methods of training would do a trick while training your Lowchen. Reward them with treats and vocal praise to motivate them. Once basic obedience training is done, jump to advanced obedience, agility, and tricks.

Lowchen is generally a healthy breed that can suffer from some of the following canine diseases:

The coat of the Lowchen is long, dense and slightly wavy. The hair is soft and sheds very little. Therefore, Lowchen does not need much grooming.

The lowchen comes in a lot of variety of colors. Some of the preferred colors and markings are listed below:

Cost: The average cost of the Lowchen puppy is between $5000 up to $8000. However, they can be adopted much less cost. The adoption cost $300 on average with the expenses of taking care of the puppy.

Height and Size: The average height of the Lowchen is 12-14 inches. The average weight is around 15 pounds.