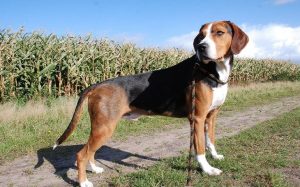 The Hamiltonstovare or the Hamilton Hound is a hunting breed of dog originated in Sweden by the founder of Swedish Kennel Club, Count Adolf Hamilton.

The Hamiltonstovare is a versatile scent hound which was bred to hunt hare and fox in Sweden. Here is all the information about the breed in brief:

The Hamiltonstovare is a versatile scent hound which was bred to hunt hare and fox in Sweden. Here is all the information about the breed in brief:

The Hamiltonstovare was originated in Sweden in the late 1800s by Count Adolf Patrick Hamilton; the founder of the Swedish Kennel Club. He needed a sturdy and flexible hound that could hunt hare and fox in forested and mountainous terrain and harsh climate of Sweden.

The Hamiltonstovare first made its existence in Sweden in 1921 and were known as the Swedish Hound which was later changed to honor the founder of the breed.

Unlike the other hound breeds, the Hamiltonstovare was not developed to hunt in a pack. They were used as a solitary hunter or in a pair. The breed still performs its original purpose in its homeland where it is very popular.

Not only in Sweden, but Hamiltons have also started making an impact around the world. However, they are still a very rare breed in the United States.

Yes, the Hamiltonstovare is a very child-friendly breed and are known to be playful, energetic and affectionate around them. They are extremely patient while playing with kids and are less likely to hurt them.

The Hamilton Hound can be a very wonderful companion for your kids because of their calm and playful behavior with kids. However, they are a hunting breed and have a strong prey drive. They can intentionally or unintentionally harm your kids. So, it is very important to keep both supervised.

The Hamiltonstovare has a sweet and friendly behavior which makes them a wonderful family pet. It forms a very close bond with its owner and feels very happy to be with its family.

The Hamiltonstovare is an even-tempered breed that makes a great companion if trained and socialized properly. Because they form a very close bond with their loved ones, they don’t like being separated or left alone at home. So, proper training should be given to prevent the dog from having separation anxiety.

The Hamilton Hound is a well-mannered, energetic and friendly personality. They have a loud voice which can be annoying for some owners. However, it is a gentle, pleasant and intelligent breed.

Training a Hamilton Hound is relatively easy as they are very obedient and calm dogs. They might act stubborn at times not willing to train to be challenging. But it can be controlled by making the training sessions very short but effective which will bring positive changes.

Facts about the Hamiltonstovare breed

Here are some facts about the Hamiltonstovare breed that you should know:

The Hamiltonstovare dogs live an average life of 10-13 years. During their lifetime, they suffer through various health issues which are as follows:

The Hamiltonstovare suffers from various ear infections. Otitis media is something to be concerned.

A hereditary condition caused when there is malformation in the hip joints of the dog is called Hip Dydplasia.

An inherited disorder which causes seizures in the brain of the dog is called Epilepsy.

A healthy Hamiltonstovare mother gives birth to 4-8 puppies at a time. You can expect to pay $1000-$1500 considering the purity of the breed.

The Hamilton Hounds are found in Tri-Color.

Here are some dog breeds that are similar to the Hamiltonstovare breed in appearance: