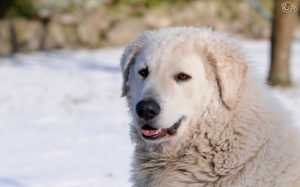 With loyal nature and good-looking appearance the Kuvasz is well- for being gentle, protective and easy to handle dog breed. This good-looking breed is an independent and aggressive type of dog and therefore they require a firm hand and consistent training.

It’s no surprise that Kuvasz is an independent dog breed which has a history among royalty. They are heavy, bulky dogs which hail from Hungary, originally bred to guard livestock.

The Kuvasz is known to be oldest dog breed of Hungary and believed to have arrived with the Magyar tribes who occupied Hungary in the 9th century.

By the 15th century, this breed was highly used as guard dogs. In 1464 Matthias I owned this breed. The king finds Kuvasz so trustworthy that he treated him like his best friend. The dog also establishes a strong relationship with the king that he followed him everywhere and even used to sleep with him in his bedchamber.

When it comes to the child-friendly dog then the Kuvasz do not fall into it. As they were bred for guarding, so it’s better to choose your Kuvasz to guard your child, not to play with them.

If your child and Kuvasz are raised together, then you can expect him to be patient with your child. Otherwise, due to their independent nature, they tend to be disobedient. But if your child is old enough and well-behaved, respect the nature of Kutsch, then you will not have problems.

Temperament: The temperament of Kuvasz is intelligent, determined, loyal to its family. They are not recommended for first-time dog owners. They are very protective by nature and is mildly tempered. With a large and strong-willed breed like Kuvasz, it is essential to start obedience training and socialization from the day you adopt them.

Personality:The Kuvasz has an imposing, impressing, massive personality. They are large and bulky in size which stands 30 inches at the shoulder with 70-110 pounds of weight. Even with big size, the Kutsz are active, agile and fast.

Behavior:The Kuvasz known to be good protectors who always ready to face even mountain lions. Some of them can be aggressive and are not suitable as family pets. They may tend to establish destructive habits such as excessive barking and digging if they do not recieve adequate amount of exercise.

Training a Kuvasz is moderately easy for the stubborn and persistent owner. As these breeds are known to be independent, so they are not patient when it comes to obedience training and can get bored easily. So in order to catch their attention, you need to keep short training sessions and keep the training fun and exciting.

Train your Kuvasz as soon as you bring them home, Use positive reinforce techniques, such as rewards, praise, and play. You need to be patient with him and he will automatically respond you well.

Facts about Kuvasz are:

The Kuvasz are generally healthy dogs, but like all other breeds they prone to have some common health issues, such as:

The Kuvasz are omly found in white color.

The Kuvasz gives birth to 6-8 puppies at a time. Kuvasz puppies are playful in comparison to adult Kuvasz . They can be rambunctious and may accidentally knock over a small child supervision is necessary even with puppies.

If you are planning to adopt a Kuvasz puppy then you should budget anywhere from $2,000 upwards .

Dogs similar to Kuvasz are: